Outrage in Tirana over dawn demolition of historic theatre 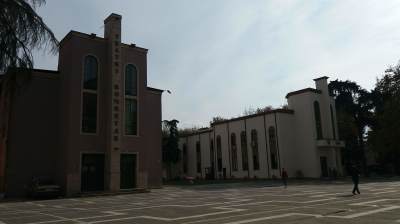 The old National Theatre was built in 1939 during the Italian occupation of Albania.
By Valentina Dimitrievska in Skopje May 17, 2020

The Albanian authorities demolished the old building of the National Theatre in Tirana in the early hours of May 17, which sparked protests by opposition parties and NGOs.

The construction of the new building is expected to begin this year, which is the 100th anniversary of Tirana being declared the capital of Albania, but the project has faced criticism and continual protests over the last few years.

At around 4.30 am, police forces surrounded the building, where several citizens, artists and opposition party members were spending the night as a form of protest, and dispersed them in order to begin the demolition procedures, Tirana Times reported.

Dozens of citizens were detained and arrested for resistance, including the leader of the opposition LSI, Monika Kryemadhi, and journalist Alfred Lela.

Some concerns were allayed when the municipality of Tirana scrapped its original plans for the new theatre to be built under a public private partnership (PPP), and decided instead to build the controversial new theatre with state money.

However, the authorities still face a backlash from campaigners who wanted to preserve the old National Theatre that was built in 1939 under the Italian occupation of Albania during World War II, and previously served as a cinema.

The Municipal Council in Tirana decided to demolish the National Theatre on May 14 during a closed online meeting but the decision was implemented before it entered into force which was expected after 10 days as of the date of approval.

The EU embassy in Tirana said in a tweet that the demolition of the National Theatre came at a time when dialogue between the government and civil society members before the irreversible decision was made has been necessary.

"We regret that this call has not been followed up by the relevant national and local institutions," the embassy said.

The UK embassy in Albania also expressed concern over the demolition of the theatre. “We are deeply concerned by missed opportunities for dialogue over the National Theatre building and episodes of violence in Albania,” it said.

Albanian President Ilir Meta said that the demolition of the theatre was an "unpardonable crime", saying that the “mafia ordered the destruction.”

The leader of the opposition Democratic Party Lulzim Basha spoke of "barbaric violence" and lawlessness and announced an opposition meeting to decide on the next steps.

Tourists trickle back to the Adriatic

Serbia’s president claims foreign intelligence influence in anti-government protests
40 minutes ago
Famous ex-defence reporter arrested, accused of treason
16 hours ago
Turkmen President Gurbanguly Berdimuhamedov takes a holiday as WHO mission finally arrives in Ashgabat
17 hours ago
Violent clashes with police at thousands-strong anti-lockdown protest in Belgrade
1 day ago
Belarus presidential election to have no outside observers, opposition may united by a single candidate
1 day ago