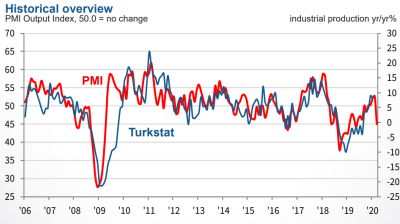 The coronavirus (COVID-19) crisis has derailed the growth momentum that Turkey’s manufacturing companies had built up over three months, pushing their sector back into contraction, according to a March purchasing managers’ index (PMI) released by the Istanbul Chamber of Commerce and IHS Markit on April 1.

“The COVID-19 pandemic comes at a time when the Turkish manufacturing sector was building good growth momentum, and is therefore a bitter blow for firms,” Andrew Harker, economics director at IHS Markit, said in comments on the latest Turkey PMI manufacturing index.

“Output and new orders slowed sharply, with the global nature of the outbreak hitting exports and supply chains hard. One positive, however, was that employment continued to rise, potentially reflecting hopes among firms that the disruption will prove short-lived,” Harker added.

The headline PMI was at 48.1 in March, down from 52.4 in February and marking the sharpest decline since May last year. Any figure on manufacturing performance below the 50.0 no-change mark denotes a contraction.

Difficulties in the sector were overwhelmingly attributed to COVID-19, which resulted in the moderations of both output and new orders, IHS Markit said. Production and purchasing activity softened for the first time in five months, while the easing in new business ended a two-month sequence of expansion, it added.

Reflecting the worldwide nature of the pandemic, new export orders also softened to a large extent, and to an extent greater than that seen for total new business, the London-based global information provider also said.

IHS Markit added: “Stocks of purchases were also reduced, as were stocks of finished goods as firms noted a general reluctance to hold inventories given current uncertainty.

“The delivery of purchased items was also impacted heavily by the COVID-19 pandemic, with suppliers’ delivery times lengthening to the second-largest extent since the survey began in June 2005.”

“In fact, the rate of charge inflation was sharp and the steepest in just under a year-and-a-half,” IHS Markit said.