PANNIER: Russia will be the elephant in the intray for Kazakhstan’s re-elected Tokayev 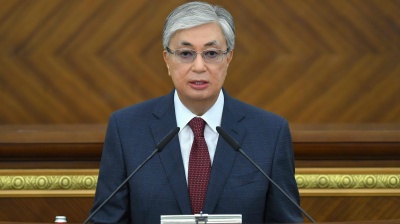 Tokayev will have his hands full keeping each of the major powers satisfied. / Akorda.kz
By Bruce Pannier November 17, 2022

It goes without saying that President Kassym-Jomart Tokayev will be re-elected in this weekend’s November 20 snap presidential election in Kazakhstan. So let’s straight away turn to the many challenges he will face as he begins a new term. One pressing matter that can’t be filed away for another day is the readjusting of Kazakhstan’s foreign policy to meet the shifting realities caused by Russia’s war on Ukraine. You might say it’s the elephant in the intray.

With Russia’s fortunes waning, Kazakhstan needs to make some changes in foreign relations while at the same time keeping in mind that Russia is down, but not out.

In January, the Russian-led Collective Security Treaty Organization (CSTO) sent some 2,500 troops, mostly Russian soldiers, to Kazakhstan at Tokayev’s request when the largest protests the country had ever seen turned violent in several large cities, while simultaneously there was an apparent coup attempt against Tokayev. Many thought that left Tokayev and Kazakhstan indebted to Russia.

That has not proved to be the case.

Russian President Vladimir Putin announced on February 21 that Moscow was recognising the independence of the Russian-occupied eastern Ukrainian regions of Donetsk and Luhansk. The next day, Kazakh Foreign Minister Mukhtar Tleuberdi said, in response to a question from the press, that Kazakhstan would not even consider recognising the independence of the two regions.

That has been Kazakhstan’s position and has been repeated by Tokayev several times, including at the St Petersburg Economic Forum in June when, with Putin sitting next to him, Tokayev called the administrations of Donetsk and Luhansk “quasi governments.”

Officially, Kazakhstan is neutral in the matter of Russia’s invasion of Ukraine, but threatening comments from Russian officials and media representatives about seizing Kazakh territory have worried many in post-Soviet Kazakhstan.

Following Tokayev’s comments in St Peterburg, State Duma deputy Konstantin Zatulin said, “If we have friendship, cooperation, and partnership, then no territorial issues are raised. And if not, then everything is possible. As in the case of Ukraine.”

While relations between Kazakhstan and Russia are tense, Tokayev realises that the two countries are tied together in many ways. The power grid in northern Kazakhstan, for example, is connected to the power grid across the border In southern Siberia, and Russia’s military, through weakened and less intimidating than it once was, is still a valuable ally for Kazakhstan in a neighbourhood where Afghanistan and dozens of Islamic militant groups lie to the south and books in China regularly include maps showing part or all of Kazakhstan (and other areas of Central Asia and Russia) as being part of historic Chinese lands.

There is also the Russian Black Sea port of Novorossiysk. Some 80% of the oil Kazakhstan exports goes via Caspian Pipeline Consortium (CPC) infrastructure to Novorossiysk where it is loaded onto tankers, many of which then take the oil to countries in Europe. The CPC started operations in 2001 and operations continued smoothly until Kazakh authorities showed they did not support Russia’s war in Ukraine.

In late March, Novorossiysk port authorities announced a suspension of loading Kazakh oil onto tankers due to apparent damage caused by a storm to two of the three loading berths at the port. Operations have been halted two more times since then.

Kazakhstan is looking for new export routes for its oil, but it will take time—one key difficulty is a lack of oil tankers available to traverse the Caspian Sea—and much work to find alternative ways of exporting the amount of Kazakh oil that has habitually shipped through Novorossiysk. That is another matter that forces Kazakhstan to keep its ties with Russia as amicable as possible.

While Tokayev has said Kazakhstan respects the sovereignty and territorial integrity of all countries in accordance with the positions of the United Nations, a thinly veiled reference to the situation in Ukraine, and Kazakhstan has sent humanitarian aid to Ukraine, Tokayev has also kept in close contact with the Russian government.

Tokayev met with Putin in May at a CSTO summit in Moscow, in June in St Petersburg, in August in Sochi, when Tokayev said there was no basis for pessimism about Kazakh-Russian relations, in Samarkand, Uzbekistan in September on the sidelines of a Shanghai Cooperation Organisation (SCO) summit, and again at a series of summits in Kazakhstan (VI Conference on Interaction and Confidence-Building Measures in Asia, the Council of heads of the Commonwealth of Independent States (CIS), and the Russia-Central Asia summit) in October.

Kazakhstan has existed for more than 30 years with anxieties about Russian irredentist sentiment, but it now seems Russia will emerge from its Ukraine debacle a weakened country and Kazakhstan will be dealing with its northern neighbour on a more equal footing in the near future.

This is also partly due to support from China. Following several months of Kazakh worries about comments from Russia about reclaiming part or all of Kazakhstan, Chinese President Xi Jinping made his first foreign visit since the COVID pandemic began to Kazakhstan, in September, on his way to the SCO summit in Uzbekistan. Xi commented on the need for respect for sovereignty and territorial integrity, which was interpreted as a message to Russia that China would not look favourably on any moves to claim Kazakhstan’s land.

China has invested billions of dollars in developing infrastructure in Kazakhstan, which Beijing now considers part of the multi-continental Belt and Road Initiative (BRI). China’s land routes toward Europe and the Middle East start by entering Kazakh territory. New railway routes running through Kazakhstan from China to Mannheim, Germany and another connecting China to Azerbaijan have started operating since April.

So Xi’s seeming assurances on Kazakhstan’s territorial integrity when he arrived in Astana in September also reflect Beijing’s own interests in keeping a valuable partner and important link for the BRI.

As promising as the relationship with China is for the Tokayev administration, there has been growing resentment from some Kazakh citizens about China’s role and influence in Kazakhstan. There were protests in 2019-2020 against plans for Chinese companies to build 55 new factories in Kazakhstan, and there were widespread protests in May 2016 when rumours spread that proposed land reforms included the possibility for Chinese citizens to buy Kazakh land.

There is also dissatisfaction among some in Kazakhstan over the government’s refusal to take a stand against Beijing’s harsh crackdown on Muslims in China’s western Xinjiang Uyghur Autonomous Region (XUAR) that borders Kazakhstan. Some of the first stories of China’s abuse of Muslims in Xinjiang were told by ethnic Kazakhs who fled China to Kazakhstan and those stories also fuelled resentment about growing Chinese economic influence in Kazakhstan.

The European Union has been very active in Central Asia in the latter half of 2022. The EU High Representative for Foreign Affairs and Security Policy, Josep Borrell, was in Kazakhstan on November 17 and European Council President Charles Michel visited Kazakhstan at the end of October.

Kazakh officials have been working with Azerbaijan, Georgia, and Turkey to expand trade corridors to Europe through the Caucasus, and also Iran. China and the EU have been supporting these efforts.

But Russia, currently under EU sanctions, is grudgingly accepting this development of new routes between Europe and China that avoid Russian territory. There is little the Kremlin can do about it, since so much of its attention is fixed on Ukraine, but it will be a sore point in Kazakh-Russian relations.

Also, the EU cannot provide the sort of funding China can and will not provide the kind of military and security support that Russia has long been giving to Kazakhstan. And the EU brings up the subjects of respect for human rights and commitment to democratic reforms that Moscow and Beijing never mention in their relations with Kazakhstan.

There are also other countries with which Kazakhstan is quickly developing stronger ties to compensate for vacuums being created by Russia’s diminishing roles in the country, and Central Asia generally. Many of these countries are in the Islamic world; Turkey, Iran, and several Arab states. They will require a different form of diplomacy to the approaches used in relations with Russia, China and the EU, or more broadly the West.