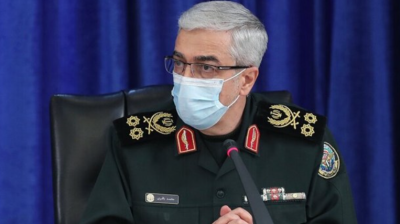 The move was announced by Chief of the General Staff of the Iranian Armed Forces Mohammad Hossein Bagheri, official Iranian news agency IRNA reported on April 8.

It comes as Turkey and Azerbaijan continue to integrate their militaries on Iran’s northwestern border as Ankara moves forward with efforts to expand and strengthen its relations with the Turkic-speaking Central Asian countries, with Tajikistan not included in discussions.

Despite frosty relations in the past amid Dushanbe’s longstanding anxieties over Iran exporting the Islamic Revolution to its territory, the two Persian-speaking countries appear to be warming to each other as Turkey goes about firming Turkic ties among their neighbours.

Bagheri said that at the start of the recent Nowruz Persian New Year celebrations, Iran hosted the Tajik defence minister Sherali Mirzo. During his trip, “the foundations for the development of military relations between the two countries were laid”, he added.

"It was also decided that a joint working group between the armed forces of the two countries should be established and this working group to draw and plan the future of military and defence relations," he added.

Bagheri mentioned that apart from Iran and Afghanistan, where 35mn people speak Persian, Tajikistan is the only other Persian-speaking nation. He talked of the “common history” of Iran and Tajikistan as an ideal basis for joint military projects.

Tajikistan in recent decades has kept its distance from Iran for fear of Tehran influencing fervent Islamic inhabitants who have long been steadfastly opposed to the Soviet-legacy rule of President Emomali Rahmon.

Dushanbe has also traditionally played Tehran off against its major southern Islamic rivals Saudi Arabia and the United Arab Emirates, which have poured financial assistance into Tajikistan while Tehran watched from the sidelines.

Showering Mirzo with compliments and also talking up the countries’ Persian historical links, Hatami said “Tajikistan has always had a special place in the foreign policy of the Islamic Republic of Iran”.

On April 2, Iran and Tajikistan exchanged two prisoners while another Iranian convict hauled up in Dushanbe was given an official pardon by Rahmon, Iran’s justice ministry announced.

The prisoner exchange occurred during Iranian Foreign Minister Mohammad Javad Zarif’s recent trip to Tajikistan for the Heart of Asia Conference hosted by the Rahmon administration.

In February, a memorandum of understanding (MoU) was finalised at a meeting of a working group of the Ministry of Labour, Migration and Employment of the Tajikistan and the Ministry of Cooperatives, Labour and Social Welfare of Iran.

The MoU deals with matters including employment options and technical and vocational training, according to Mehr, which cited Ali Hossein Shahrivar, director of international affairs at the Iranian ministry.

In January, Iran and Tajikistan agreed on the second phase of completing the construction of the five-kilometre Istiqlol/Estaghlal (Independence) tunnel, described by World Highways as one of the most dangerous underground road links in the world.

The Istiqlol is a 5,040-metre-long tunnel located 80 kilometres northwest of Dushanbe at an elevation of 2,720 metres. It is part of the M34 highway connecting the capital with Tajikistan’s second-largest city, Khujand.

Jailed anti-corruption activist and opposition politician Alexei Navalny is close to death as he goes into his 19th day of a hunger strike in prison and the Russian authorities try to ban his organisation as "extremist."

Team Navalny pulls the trigger on the next big demonstration scheduled for April 21
6 hours ago
Samolet see EBITDA up by half despite the coronacrisis
9 hours ago
Will Belarus merge with Russia this week?
15 hours ago
Navalny close to death as Kremlin attempts to ban his group as extremist
16 hours ago
Azerbaijan fires info war salvo against Russia
21 hours ago