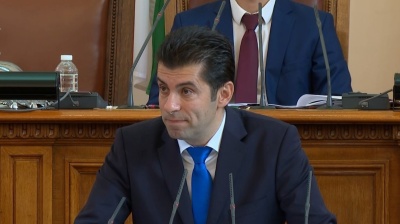 “To sit at the negotiations table with [ITN] again for me is the definition of stupidity," said Prime Minister Kiril Petkov.
By Denitsa Koseva in Sofia June 27, 2022

There Are Such People (ITN), the party of Bulgarian showman Slavi Trifonov, is ready to talk about a new ruling coalition with Change Continues, the party’s deputy leader Tosho Jordanov said two weeks after the party left the ruling coalition, leading to the collapse of government.

However, Prime Minister Kiril Petkov has rejected the proposal, saying that repeating the same mistake twice would be stupid.

In an interview for public broadcaster BNR on June 26, Jordanov said the two parties have a lot in common in goals and priorities and could join forces again. However, the party had one condition – Petkov to give up being  prime minister of the next government.

“If Change Continues cool their heads, and if we are in the situation to choose the less bad [option], if there are talks with compromises, including Kiril Petkov not to be a prime minister, it is not impossible to achieve an agreement. We have an awful lot common goals, although we did not fulfil anything. We shall have to work under different rules, with more specifics,” Jordanov said.

A few days earlier, ITN’s member Iva Miteva said the party is willing to make a government if given the third mandate by President Rumen Radev.

Bulgaria’s government lost a no-confidence vote on June 22. Now President Rumen Radev must give a mandate to Change Continues – the largest party in parliament – to try to form a new government. If the party fails, Radev will give a second mandate, to the former ruling Gerb party of Boyko Borissov. However, Gerb has said that it would return that mandate without attempting to form a government. In that case, Radev can pick any of the remaining parties in parliament for the last mandate. If it also fails, Bulgaria will hold an early general election.

In a separate interview for BNR, Petkov confirmed on June 26 that he will be the party’s nomination for prime minister and that the government will not be changed. He declined to specify who will replace the four ministers of ITN’s quota. One of them, Radostin Vassilev, already left ITN and is expected to keep his post of sports minister.

Petkov also said that his party will not hold talks with ITN.

“To sit on the negotiations table with them again for me is the definition of stupidity. How to trust a person like Slavi Trifonov, knowing what he is capable of,” Petkov said.

He added that his party will not negotiate with Gerb and the ethnic-Turk Movement for Rights and Freedoms (DPS), which were seen as tainted by corruption. The far-right pro-Russian Vazrazhdane is also out of the list.

Change Continues’ current two partners – the Bulgarian Socialist Party (BSP) and Democratic Bulgaria – are willing to talk with the party on a new coalition. The party will also try to attract six independent MPs who have left ITN, but will still need six more to have a majority. Petkov and the party’s co-leader, Finance Minister Assen Vassilev – have repeatedly said they will try to persuade more MPs willing to fight corruption and work for Bulgaria’s progress to join them.

Meanwhile, Democratic Bulgaria’s co-leader Hristo Ivanov said that his formation and Change Continues might form a coalition in case of a new early election. That is seen as a move that could bring them more support as the two formations have similar priorities and goals.