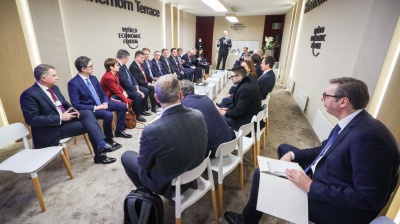 Serbian President Aleksandar Vucic has been widely mocked on social media after pictures were published of him sitting alone at the back of a session at the World Economic Forum in Davos.

The photos, published on North Macedonia’s presidency website, were taken at a meeting of Western Balkan political leaders on January 19.

It wasn’t clear from the pictures why Vucic was sitting alone at the back of the room.

Independent Serbian media published the photos — which were ignored by the pro-government press. They also sparked intense speculation on social media. 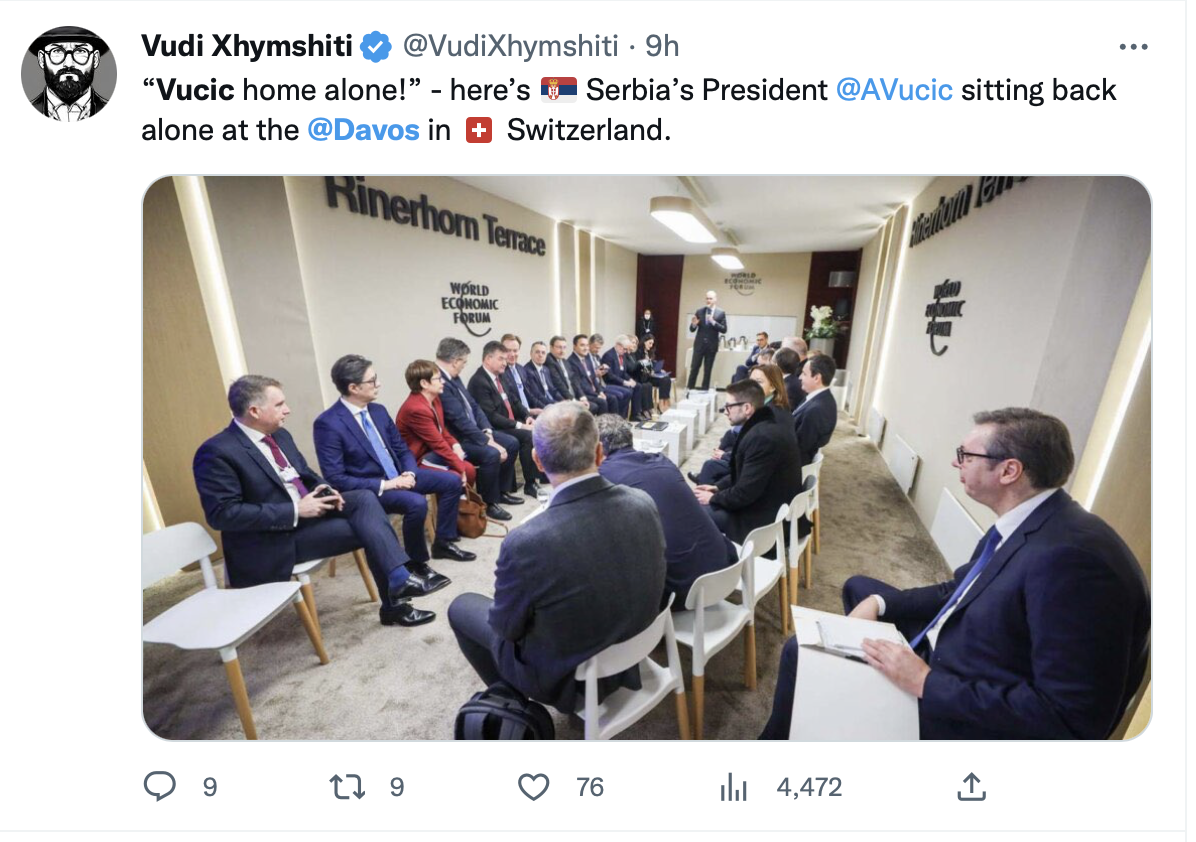 “This unfortunate man of ours is taking notes... I guess he's studying economics or preparing for an exam,” joked one Twitter user from Serbia.

Speculating on the reasons for Vucic’s apparent isolation, several linked it to Serbia’s refusal to impose sanctions on Russia following the invasion of Ukraine. That has stalled Serbia’s EU accession process and damaged its standing in the West.

“This is how it ends when you are #Putin's friend! #Vucic  sitting alone at the end of the room at the meeting of the leaders of the Western #Balkans at the World Economic Forum in #Davos," one commentator tweeted. 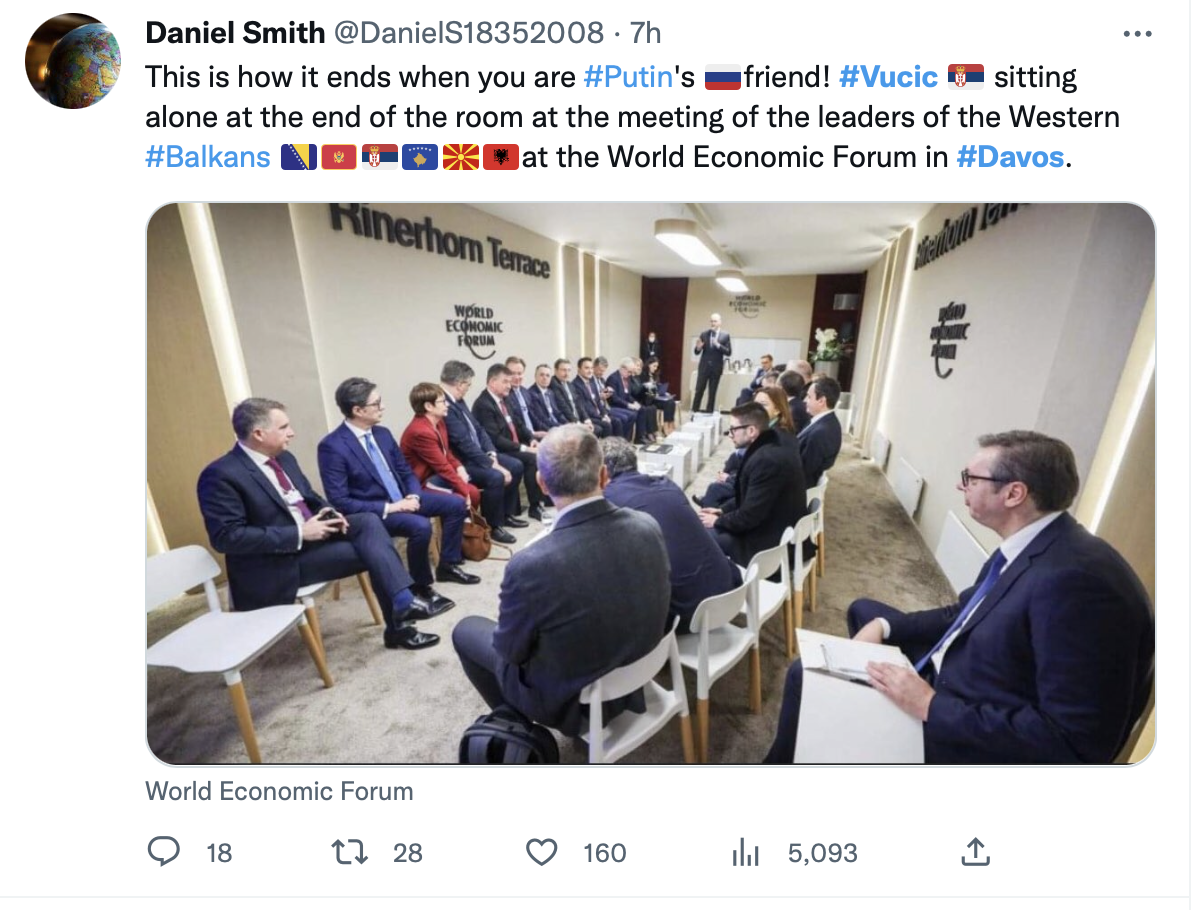 “Russian proxy Serbia's autocrat Vucic utterly humiliated & isolated in the back benches during a summit of Western Balkans & EU officials in Davos,” wrote another, who like many observers was quick to point out that Kosovo’s prime minister was seated much more favourably, in the midst of the other leaders present. 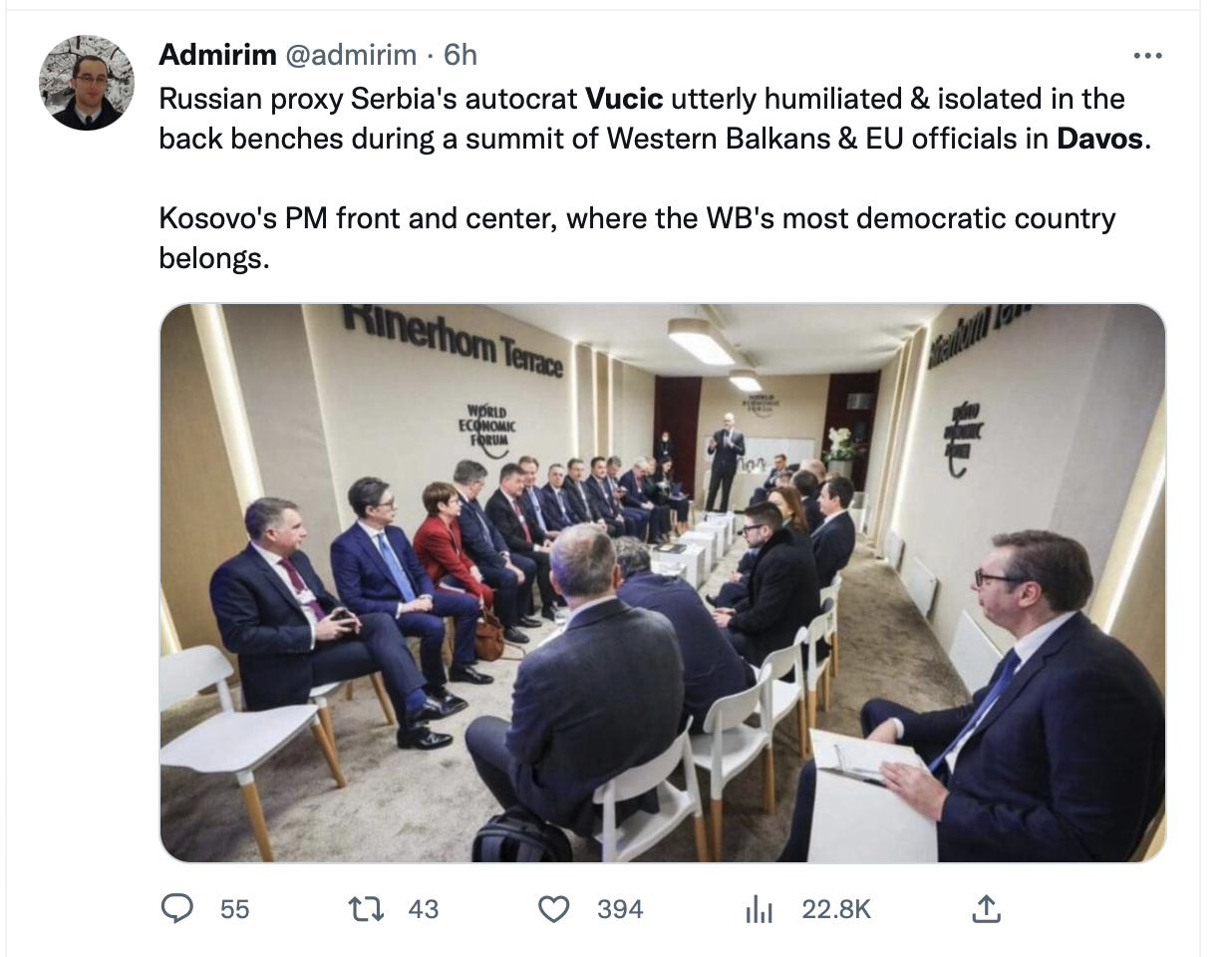 This year’s World Economic Forum in Davos didn’t start well for the Serbian president, who was confronted by a flag of Greater Albania — a political concept that adds territory from neighbouring countries to that of Albania — hanging from a building across the road from his hotel.

Meanwhile, the Ukrainian Society in Switzerland submitted a letter to the organisers of the forum, in which they “question the legitimacy of the appearance of President Vucic at Davos in light of his response to Russia's war of aggression in Ukraine”.

The society goes on to argue: “Under Vucic, media freedom in Serbia has been dangerously diluted and now Serbia's pro-government mainstream media has become a major source of Russian disinformation in Europe supporting Putin's criminal invasion of Ukraine.”

On January 18, MEPs voted in favour of a resolution calling on the EU to freeze Serbia’s accession process until Belgrade aligns with EU foreign policy by introducing sanctions on Russia.

This was despite Vucic appearing to distance himself from Moscow, stressing in an interview with Bloomberg that Serbia views both Crimea and the Donbas region as part of Ukraine.