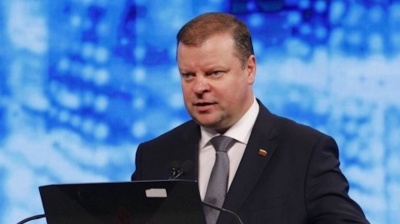 Saulius Skvernelis failed to make it to the second round of Lithuania's presidential election.
By Wojciech Kosc in Warsaw May 16, 2019

The defeat of the incumbent Prime Minister Saulius Skvernelis in last week’s presidential vote in Lithuania has thrown the country’s politics in turmoil one year ahead of the general vote.

Skvernelis did not make it to the run-off vote, in which popular favourites Ingrida Simonyte and Gitanas Nauseda will face each other on May 26.

The PM said he would step down in July if his party – the Greens and Farmers Union (LZVS) – also loses the election to the European Parliament that takes place on the same day as the run-off vote.

The PM’s party appears likely to concede a defeat in the European election, polls suggest. That is fuelling speculation in the Lithuanian media on the general election taking place early or the country stumbling forward under a minority or interim government.

Under the Lithuanian constitution, the government also needs to be reappointed by the new president, although that is typically a formality. Skvernelis’ own pledge to step down could complicate that, however.

Unless an earlier vote in called, the general election will take place in October 2020.

Some Lithuanian media hint, however, that Skvernelis is becoming less “categorical” about stepping down in the days following his defeat in the presidential contest. The PM received strong backing from his party in an internal vote of confidence that took place on May 14.

“It was not a test of confidence in Skvernelis, as nobody had doubts in him before that and now, but it was just giving a mandate and request that he continues working," the speaker of the Lithuanian parliament Viktoras Pranckietis told The Baltic Times.

Meanwhile, the final count of votes in the first round of the presidential election showed the ex-finance minister and an opposition MP Simonyte win with 31.21%. The former chief economist of SEB Bank Nauseda won 30.93%.

The difference between the two contenders was just 3,935 votes, the Central Electoral Commission said.