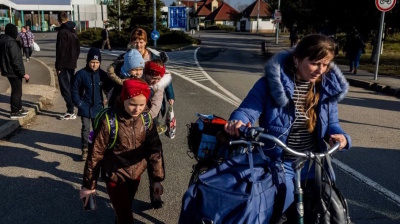 Poland, the Baltic states and Finland are threatening to unilaterally ban Russian tourists unless the European Union agrees on a much tougher common approach at a EU foreign ministers’ informal summit in Prague on Wednesday.

According to a joint statement seen by the Financial Times, the states demand measures that would “decisively decrease the flow of Russian citizens into the European Union and the Schengen area”.

“Until such measures are in place on the EU level, we will consider setting up temporary measures on the national level in order to address imminent public security issues related to the increased influx of Russian citizens across our borders,” they said.

Poland, Finland and the Baltic states have all taken a strong stance on punishing Russia for its invasion of Ukraine and have stopped granting new visas for Russian tourists. Estonia has even cancelled visas it has already granted.

Despite not granting new visas, however, Finland and Estonia in particular have seen a sharp rise in incoming Russians using their countries as an entry point to the EU’s passport-free Schengen area, using visas (typically multi-entry and for several years) granted by other EU states.

About 700,000 Russians have entered the five countries since President Vladimir Putin’s full-scale invasion of Ukraine in late February, the FT reports.According to the EU border control agency Frontex, almost a million Russians have come to the EU since the start of the war, with 333,000 entering Finland, 234,000 Estonia, and 132,000 Lithuania, DW reported. According to Finnish authorities, Austria, Greece, Hungary, Italy and Spain are among the main countries issuing Schengen visas to Russians.

An EU ban on incoming flights from Russia means that Russians can no longer fly directly into the EU. Greece has seen a big influx of Russians by road from Serbia and by ship from Turkey. Bulgaria has also seen an increase via flights from Istanbul and Armenia.

EU foreign ministers are expected to agree tougher restrictions on granting visas to Russians at their meeting on August 31, by suspending the 2007 visa facilitation agreement with Moscow, making it more expensive and laborious for Russians to apply.

The European Commission has, however, been cool on a full ban. “I don’t think that to cut the relationship with the Russian civilian population will help and I don’t think that this idea will have the required unanimity,” Josep Borrell, High Representative for Foreign Affairs and Security Policy, who chairs the summit, told the Austrian national broadcaster late on Sunday, according to Euractiv.

EU sanctions require unanimity among all 27 member states. Hungary maintains friendly ties with Moscow and could veto a bloc-wide visa ban. The Bulgarian caretaker government too has said it opposes stopping the visas for Russian nationals.

Dmitry Peskov, Putin’s spokesman, said on Tuesday that the proposed measures were a “collection of irrationalities bordering on madness”, the FT reported.

The Northeastern Europeans say that suspending the visa facilitation agreement is “a necessary first step” but if that was all that was agreed, they would pursue tougher measures as a regional bloc to reduce the numbers of Russians entering their countries.

“First of all, we are seeking a European solution because it’s the most sustainable and legally correct one. ... If such a solution is not found, we do not rule out looking for a regional solution that would involve the Baltic states, Poland and, potentially, Finland,” Lithuania’s Foreign Minister Gabrielius Landsbergis told reporters after a meeting of the parliamentary Committee on Foreign Affairs on August 23.

It is not clear how a regional solution could be compatible with the rules of the Schengen travel-free area.

The five states argue that a ban is needed to demonstrate to Russians that supporting their government’s aggression against Ukraine comes with costs. Richer Russians have continued to travel to the EU, with some boasting of their trips on social media posts that have gone viral.

Estonian Prime Minister Kaja Kallas told Politico in an interview that tourist visa restrictions are “something that hurts Russia” but “doesn't hurt the European side”. The move, she argued, is “something that Russia is afraid of” because it impacts the elite.

In their letter, the five states also claim the ban is needed on security grounds. “We believe that [Russian visitors] could become a serious threat to public security,” the five countries said in the joint statement.

The five also reiterate that there should be “exceptions for dissidents as well as other humanitarian cases”. “We need to continue to support opponents of the Putin regime and provide them with opportunities to leave Russia,” the statement added.

However, France and Germany, who have taken a more restrained stance on sanctions, as well as Mediterranean EU states that benefit from Russian tourism, argue that banning visas would be collective punishment and could be used by the Kremlin as propaganda. They say that is important for Russians not to feel isolated and to be able to witness life in democratic countries.

“While limiting contacts with regime representatives and authorities to areas of vital EU interest, we need to strategically fight for the ‘hearts and minds’ of the Russian population — at least the segments not yet completely estranged from ‘the West',” Paris and Berlin wrote in a memo before the informal summit, seen by Politico.

"We caution against far-reaching restrictions on our visa policy, in order to prevent feeding the Russian narrative and trigger unintended rallying-around the flag effects and/or estranging future generations.

"We should not underestimate the transformative power of experiencing life in democratic systems at first-hand, especially for future generations," they added.

There could also be legal obstacles to a complete ban on visas, and it would be problematic distinguishing between ordinary Russians and those fleeing Putin’s regime or visiting the EU as artists, journalists or civil society activists.

The Czech Republic, the current EU rotating president, Denmark, Sweden and (non-EU member but Schengen member) Norway are also calling for much more restricted visa issuance,  but have not signed the letter. The Czech Republic and Slovakia have also largely stopped granting visas to Russians, with Prague extending the ban to Belarusians.

“I personally find it deeply provocative that Russian tourists can spend their vacation in Europe while Ukrainian cities are being shelled and destroyed,” Danish Foreign Minister Jeppe Kofod told Politico. “Seeing tourists here in Europe, Russian tourists, it’s like the war has no consequences … I think it’s wrong.”

Czech Foreign Minister Jan Lipavsky told Czech news site Denik N this week: “Those Russians who travel to Europe on tourist visas are not ordinary citizens of the Russian Federation, they are the cream of the crop from Moscow and St. Petersburg ... The conflict does not seem to concern them. They quietly support the totalitarian government of Vladimir Putin.

“If Europe could find a way to show them that they are de facto supporting the war with their indifference, it would be appropriate to work with it this way. The scenes where some Russian tourists are having fun in Southern Europe while Russian soldiers are attacking Ukrainians feel really out of place to me.”