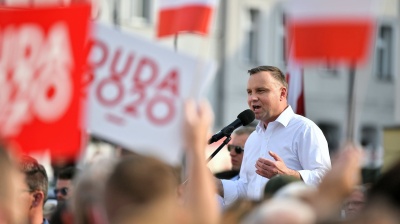 Poland declares state of emergency along border with Belarus to stem migration
By Wojciech Kosc in Warsaw September 2, 2021

Poland’s President Andrzej Duda declared a state of emergency along the border with Belarus on September 2 in an attempt at stemming illegal migration from Belarus.

Poland is grappling with the rising number of migrants after Belarus' president Alexander Lukashenko adopted a policy of actively pushing migrants and refugees across the boarder into his EU neighbours.

Minsk has been deliberately offering Iraqis flights to Belarus and help from security forces to cross the boarder into Lithuania. However, it has been reported that Belarus is sending people from Afghanistan, as well as other Middle Eastern countries, to its borders with Poland, Lithuania, and Latvia – which are the EU’s easternmost member states.

Lukashenko is retaliating against sanctions imposed on him and the country following a rigged presidential election on August 9 last year.

Poland paints the decision to impose the state of emergency as a pro-EU move.

“The situation on the border with Belarus is difficult and dangerous," Duda’s spokesman Blazej Spychalski told a news conference.

Details of the restrictions, which will cover 183 municipalities along the border, are still being worked out by the home affairs ministry but the general remit of the president’s order makes it clear that no media will be able to report on the government’s dealing with the migrants.

The state of emergency will forbids people not living in the areas in question to travel there or and stay there. Gatherings will also be banned.

Since August, Poland’s military and border guards have been sealing the border with barbed wire fence.

Uniformed servicemen, meanwhile, are keeping close watch on any migrants attempting to cross into Poland. In one case, a group of 32 migrants, reportedly from Afghanistan, has been stuck for over three weeks now in the village of Usnarz Gorny, as Poland is not letting them in, denying asylum requests.

That has earned criticism from human rights organisations for isolating the migrants from medical help or supplying food and water. The migrants are camped outside with no basic amenities while the temperature drops well below 10°C at night.

“The problem is not about the people staying near Usnarz Gorny. This is just the tip of the iceberg that Lukashenka would have liked to treat us with,” Home Minister Mariusz Kaminski told a news conference.

The minister also said that the state of emergency was due to the Zapad 21 quadrennial military drill by Russia and Belarus, involving tens of thousands of troops and is due to start next week.