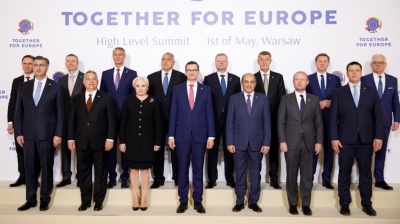 Poland wants the EU to devolve more powers to national governments and opposes deeper integration of some – mostly Western – member states in specific policy areas, Polish Prime Minister Mateusz Morawiecki said on May 1 at the summit of 13 mostly Central and Eastern European states in Warsaw.

The leaders gathered in the Polish capital to celebrate the 15th anniversary of the EU’s largest enlargement to date that saw 10 countries – mostly former communist CEE economies as well as Cyprus and Malta – join the bloc in 2004.

For a few years now, however, the new member states – Poland and Hungary in particular – have grown ever more critical of the EU, accusing Brussels of usurping too much power from the national governments on the one hand and pushing for greater integration only of selected member states on the other hand.

“Where it doesn’t have to, the European Union should leave member countries to their own competences... We say this with a single Central European voice,” Morawiecki said at the summit, Reuters reported.

Poland has been opposed to the EU on a number of issues, from handling migration to faster adoption of policies to mitigate climate change. Warsaw is also at odds with Brussels over its reforms of the judiciary, which the EU is investigating as handing control of the courts to the executive branch.

Hungary is another of CEE’s troublemakers causing headaches for Brussels, while elsewhere in the region the Eurosceptic movement has made progress. The most recent example is the Estonian far-right group EKRE, which became a co-ruling party in the Baltic state in late April.

Voters across the EU will go to the polling stations later this month to elect a new European Parliament with the Eurosceptic and populist parties expected to make gains.

The summit adopted a declaration on the “reunification of Europe” calling for the single EU market to be completed, enlargement of the EU to the Western Balkan countries, and a strengthening of the Eastern Partnership with non-EU states like Ukraine and Georgia.

The declaration also called for EU security to be enhanced, including addressing the causes of migration to the bloc.

The CEE leaders also said climate change is a “direct threat” to Europe and the world that requires a shift to a low-emissions economy. Finally, they voiced support for the EU’s policies to reduce differences in development between member states.

The latter call is a reaction to ideas in the European Commission to link EU’s cohesion funding – which has co-financed countless infrastructure and environmental investments across the region since 2004 – with meeting standards like the rule of law.