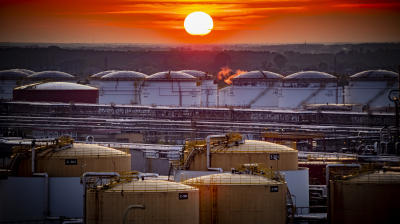 For all the talk across the EU about how it is impossible to wean the bloc off Russian oil quickly, Poland says it is ready to do just that in the space of a few weeks.

Yet critics say that the government is still not prepared to put its money where its mouth is, and has yet to take any decisive action.

Poland is one of the EU’s heaviest users of Russian oil. Pumped via the Druzhba (Friendship) pipeline, these supplies made up around 65%-70% of all oil imports into Poland in 2020, coming in at nearly 17mn tonnes. That is an increase of 48% versus the year 2000.

Despite this overwhelming dependence on Russia, Poland has been at the forefront of the EU countries pressing to hit Russia’s income from exporting energy commodities hard and fast.

Poland’s Prime Minister Mateusz Morawiecki said on March 30 that Poland would end buying Russian oil – as well as coal and gas – by the end of 2022.

“Russia uses fuels and energy commodities – its most profitable source of income – to finance its military [and] as a tool of political and economic blackmail, as well as cross-border corruption,” Morawiecki wrote in a letter to fellow EU leaders in mid-March.

On March 30, Morawiecki paid a visit to the storage facility of Poland’s PKN Orlen, the state-controlled oil giant, to say that his government’s plan to end imports of Russian energy commodities was “the most radical in Europe”.

“[The plan] is needed so that, finally, there is a wake-up call in Europe,” Morawiecki said.

Coal will go as soon as next month in the easiest part of the operation, mainly because of the small volume of imports. While on gas, Poland has already laid much of the infrastructure groundwork in order not to renew its supply deal with Gazprom, which expires at the end of this year.

On oil, Poland says that it will use deliveries via the oil terminal in Gdansk, which can handle 36mn tonnes of crude oil annually, more than the 26mn tonnes Poland has consumed in recent years.

PKN Orlen’s contract with Rosneft, which secures Poland 300,000 tonnes of oil per month, expires in December. Another contract, with Tatneft, provides for deliveries of up to 200,000 tonnes per month and expires only in December 2024.

Other than the contracted oil, PKN Orlen has now ditched purchasing Russian oil on the spot market, turning to North Sea suppliers instead.

But Poland’s government has been accused of dragging its feet about ending Russian oil imports, while calling for an urgent EU-wide embargo at the same time. Warsaw says that a member state simply cannot unilaterally sever deals with third countries as that would go against EU law and lay it open to compensation claims.

“Ending any member state’s trade agreements with a third country is a violation of EU law, no matter what you might think about that. Decisions are needed at the EU level so that there are no problems with compensation later,” Deputy Foreign Affairs Minister Piotr Wawrzyk told the broadcaster TVN24 recently.

The government’s fear of what the EU might say is surprising, critics say. Warsaw has long ignored the EU in the rule of law spat, for example, in which it chose to disregard the rulings of the Court of Justice of the EU, which are fundamental to the bloc’s legal order.

In the context of Russia’s war on Ukraine – which has unified the EU and also made Poland a strategic country overnight – it would be unlikely that Brussels would give Poland a hard time over going it alone against Russian energy imports.

“I doubt that the Commission would take any decisive steps, for example a complaint to the CJEU,” said Tomasz Wlostowski, a lawyer specializing in EU trade law, TVN24 reported.

The lawyer added that an intervention from Brussels would be seen as the EU actually defending Russian interests.

In any case, Poland seems inconsistent in its approach. Without looking at the EU, it has been working on a ban on coal imports, which is to take effect as soon as next month.

Coal is but a tiny part of the EU’s energy commodity imports from Russia. By contrast, Russia supplies around one quarter of the bloc’s oil consumption and Poland’s main concern is that if it went ahead and ended imports unilaterally, other countries could gain an unfair upper hand on the market.

“There could be a situation in which we would stop buying [Russian oil], but others, say German refineries, which are partly owned by the Russians, would continue to do so,” Obajtek said in the Rzeczpospolita interview.

Missiles or sabotage: What caused the explosion at the Russian airbase in Crimea?
1 day ago
Czech government remains colour blind on green issues
1 day ago
Poland ups the ante in feud with Brussels over judiciary reforms
2 days ago
What's the current outlook for Belarus' export sector?
3 days ago
Russian gas exports to Europe tumble in June
3 days ago