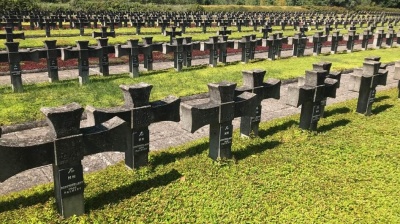 “I ask for your forgiveness,” German President Frank-Walter Steinmeier said – in Polish – to people gathered on the market square in the Polish town of Wielun.

Steinmeier and the Polish President Andrzej Duda arrived in Wielun, which, arguably, was the first town to be crushed in World War Two, a global conflict that began in Poland on September 1, 1939. The war, which left Poland in ruins and with 6mn dead, continues to influence politics in the Twitter era — reinforcing reconciliation but also fuelling resentment.

Duda and the Law and Justice (PiS) party that elevated him to power have made history a tool to strengthen their appeal to voters, a strategy that has intensified recently, just weeks before the next general election and ahead of the presidential vote in 2020. PiS correctly identified Poles’ yearning to have their “first to fight” story relayed to the world, which, it might seem, is beginning to forget who fought whom and why.

That is why the Polish government ran full-page ads and extras highlighting Poland’s plight in 1939 in September 1 editions of renowned newspapers like The Washington Post, Le Figaro and Die Welt.

“Why is it so difficult for the West to understand how big a catastrophe September 1939 was for Poles and how far-reaching its consequences were? The history of twentieth-century Poland is not only difficult, but it is also an uncomfortable topic for the leading countries in the world,” historian Wojciech Roszkowski wrote in an editorial.

Truth, not arbeit, will set you free

But there could not be any doubt on how the events unfolded in Wielun eight decades ago, President Steinmeier made clear.

A sleepy border town of some 15,000 in 1939, Wielun is widely considered to have been the first target of the German aggression. Starting at dawn, German bombers obliterated 70% of the town in several raids, killing at least 127 civilians although some estimates put the number as high as over 2,000.

Some researchers dispute whether Nazi bombs did rain on Wielun before the attack on the coastal outpost Westerplatte in Gdansk that for many people in Poland and abroad is where the war started.

Still, Wielun – which had no military significance and could have been attacked in a rehearsal for terrorising civilians in Hitler’s all-out war, some historians claim – has become a tragic symbol of the war that cost Poland the lives of 6mn people, including the extermination of nearly the entire community of 3mn Polish Jews who perished in the Holocaust. The Nazis set up the most notorious death camps – such as Auschwitz, Belzec and Treblinka – on Polish soil.

“Thank you, President [Steinmeier] … For me, and for the Wielun people, I think what is most important is that you are here [as if in] a moral atonement. You have come to this place to face truth that’s very difficult for Germans and Germany. But because Germany has never denied this truth, it has the power to liberate, connect, and build friendship,” Duda said.

For Poland, the war's aftermath continued for more than 40 years following the Third Reich’s capitulation in May 1945. Poland and the rest of Eastern Europe ended up under control of the Soviet dictator Joseph Stalin as part of the post-war order agreed on by key allies: the Soviet Union, the US and the UK. It is not uncommon to hear in Poland that WW2 only ended in 1989 for its people.

Unsurprisingly then, WW2 is the cornerstone of Poland’s collective psyche. There is literally no Polish family that did not suffer at he hands of the Germans or the Soviets.

The Germans and the Russians

Sealing Poland’s fate, the Soviet Union attacked Poland on September 17 – when the Nazis began closing in on Warsaw — fulfilling a secret pact between Hitler and Stalin. In a video that outraged many in Poland, the Russian foreign ministry said the pact was a difficult but necessary decision to ward off the Nazis after Poland refused to help contain them.

In a clear sign that a reconciliation similar to one that has been achieved with the Germans is far off in the case of Russia, Poland did not invite Russian President Vladimir Putin to commemorate the anniversary.

“Today attempts are being made in a number of western countries to equally blame both Hitler’s Germany and the Soviet Union for the [WW2] breakout,” the Russian ministry of foreign affairs tweeted in apparent response to the commemoration events in Poland.

“One may have varying opinions on Soviet policy during the initial period of World War Two, but it is impossible to deny the fact that it was the Soviet Union that routed Nazism, liberated Europe and saved European democracy,” the ministry also tweeted.

After Wielun, Duda and Steinmeier flew to Warsaw for the main commemoration events that gathered leaders of 40 countries, including US Vice President Mike Pence, standing in for President Donald Trump.

The German and Polish presidents repeated their conciliatory speeches.

“As a German guest, I stand barefoot before you on this square. I look gratefully to the Polish people’s fight for freedom. I bow in grief before the victims’ pain.

“I ask for forgiveness for Germany’s historical guilt. I recognise our enduring responsibility,” Steinmeier said.

In a speech positively received across the normally very divided domestic political spectrum, Duda spoke not just about the Polish victims of the war, but also about Jews, Ukrainians, Belarusians, and Roma. He also criticised Russia for seizing the Crimean Peninsula from Ukraine in 2014 and attacking Georgia in 2008. The Ukrainian President Volodymyr Zelensky and the Georgian President Salome Zourabichvili listened.

In the speech from religious conservative Pence, God and faith expectedly took prominence.

Given the importance of the politics of memory for the ruling party’s domestic strategy – just seven weeks before general election that PiS hopes to sweep – the hosts did not forget to touch upon points that could give it an edge over the opposition.

“Poland suffered great material, spiritual, economic and financial losses. We must remember that, we must speak about those losses, we must demand the truth and we must demand compensation,” said Prime Minister Mateusz Morawiecki at Westerplatte in Gdansk.

PiS has long brought up the issue of reparations for Poland’s wartime losses – estimated by the ruling party at no less than $850bn – as an important part of its nationalism-centred, history-ridden domestic policy.

The ruling party has channelled millions of zloty to government-run agencies like the Polish National Foundation with an aim to explain Polish history abroad. Via the state radio and television and through a number of friendly media, it has also fanned the flames of popular patrioticism, from the cult of the so-called “Cursed Soldiers” (guerillas fighting the Communist regime after WW2) to whitewashing cases of Poles’ involvement in the Holocaust, to distrust of the EU.

“Poland was destroyed, murdered, robbed and betrayed by Western countries in 1939 and then during and after WW2. If other countries behaved honorably, today Poland would be so strong that no EU official would have the courage to offend and instruct us,” one of the ruling party’s hawks, member of the European Parliament Patryk Jaki, said on Twitter, referring to Brussels' frowning upon PiS over issues like the reform of the judicial system.