Poland’s CPI accelerates growth to 4.8% y/y in May 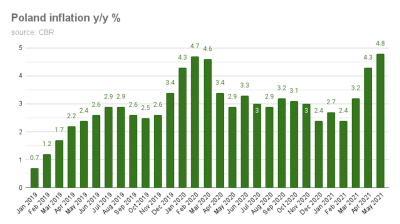 Polish CPI grew 4.8% y/y in May, the annual inflation rate picking up 0.5pp versus the preceding month to the highest level in nearly 10 years, statistical office GUS said on June 1.

The increase is in line with consensus. The flash reading for May moves this year’s inflation trajectory still further up, adding to the pressure on the central bank NBP to tighten its currently super dovish monetary stance.

Analysts have begun noting that the accelerating price growth may at first strengthen the hawkish rhetoric, eventually leading to hiking the interest rates, currently at an all-time low of 0.1%.

“As the Polish economy is expected to expand by around 5% this and next year, and inflation will remain elevated over that period of time, we think that the NBP will no longer be able to stick to its loose monetary policy,” Erste said in a comment on the GUS release.

“We expect that along with significantly accelerating economic growth, higher wage dynamics and a tight labor market, the demand pressure will build up, partially translating into consumer prices,” said Bank Millenium.

“In addition, the implementation of the so-called Polish Deal, which includes many demand elements, will have a pro-inflationary impact in 2022 and the following years,” it added.

The effect may be a hike in the interest rates as soon as in late 2021. “We expect the central bank to deliver a 15bp hike in the fourth quarter after the publication of its November forecast and to follow with two further 25bp hikes in 2022,” Erste said.

The main inflation driver in May was the fast-rising prices of fuels, which surged off last year’s pandemic-induced low base due to growth in oil prices, GUS data indicated. Fuel prices ballooned 33% y/y in May, compared to an expansion of 28.1% y/y the preceding month.

Food prices also stepped up their growth rate, increasing 1.7% y/y in May after adding 1.2% y/y in April. Growth in energy prices also accelerated, expanding 4.4% in annual terms in the fifth month after growing 3.9% y/y in April.

The outlook is for inflation to remain elevated.

“Over summer months we expect headline CPI to somewhat ease and move toward 4% y/y, before increasing and returning above 4.5% y/y in the fourth quarter. Core inflation will likely stay above the central bank’s target this year as well,” Erste said.

The sector's net profit in August amounted to RUB244bn with a return on capital of 26% in annual terms. The profits were 7% more than the July result of RUB229bn.

The inflation of Russian consumer prices has soared to uncomfortable highs, but those of producer prices have grown even faster, although the pace of growth has slowed somewhat in the last two months.

Montenegro’s GDP growth was much higher than the EU average of 14.2%, as it recovered from a steep contraction in 2Q20.

The Russian physicist and election statistics expert Sergey Shpilkin has released another two charts on voting patterns in the recent Duma elections that show a “comet effect” and a “Moscow blob”.

Russian banks extend profits in August, on track to earn a record RUB2.5 trillion this year
8 hours ago
Russia’s PPI inflation up 1.5% to 28.6% in August
23 hours ago
Montenegro’s economy posts strong 19% y/y growth in 2Q21, higher than EU average
2 days ago
Russia’s Duma elections statistics: the comet effect and the Moscow blob
4 days ago
Romania and Latvia's car ownership rates among lowest in Europe
4 days ago