Poland’s CPI picks up to 3.2% y/y in September as COVID-19 restrictions drive up cost of services 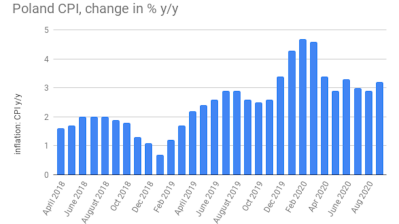 Polish CPI expanded 3.2% y/y in September, the growth rate accelerating versus the annual reading recorded the preceding month, statistical office GUS said on October 15. The official figure is in line with GUS’s preliminary data published at the beginning of this month.

The pick-up in price growth owes primarily to the rising prices of services, which grew 7.2% y/y in the ninth month, adding 0.6pp to the y/y reading from August. More expensive services resulted from companies transferring higher costs of heightened sanitary standards onto consumers, analysts say.

“It also is the effect of the outflow of workers from abroad, which is reflected in higher prices of social welfare services, household maintenance and childcare,” Bank Millennium said.

Meanwhile, prices in the most-weighted segment, food and non-alcoholic drinks, grew 2.8% y/y in September, slowing down versus an expansion of 3% y/y in August, a breakdown of the data showed.

Prices also expanded 7.3% y/y in the second most-weighted segment of housing in September, adding 0.1pp to the growth rate recorded the preceding month.

CPI growth in September was impeded primarily by prices falling 4.9% y/y in the transport segment (after falling 7.1% y/y in August). A dip of 2% y/y (-1.9% y/y in August) in the shoes and clothing segment also held back the main indicator.

In monthly terms, CPI declined 0.2% in September after retreating 0.1% m/m the preceding month.

The slowdown of inflation as a result of the pandemic crisis is slower in Poland than in other countries of the region, Bank Millennium noted.

“In Romania, the Czech Republic and Hungary, inflation slowed down in September, while in Poland it accelerated. This may mean that a strong fiscal impulse (the general government deficit will increase by nearly 10% of GDP this year) and only a moderate increase in unemployment, and thus [an insignificant] loss of income, give companies room to pass on higher costs to consumers,” Bank Millennium said.

The slower deceleration of inflation may be partly associated with an expansionary fiscal and monetary policy, the bank concludes.

Eventually, however, the CPI is expected to slow down towards the National Bank of Poland’s target of 2.5% at the end of the year, according to most analysts.

Poland’s PMI remains stuck just above the improvement line at 50.8 in November
Brighter days ahead: The economic bounce back in 2021
Central, Southeast Europe stock markets jump in anticipation of COVID-free future

The seasonally adjusted IHS Markit Russia Services Business Activity Index registered 48.2 in November, up from October's five-month low of 46.9, but still below the 50 no-change mark.

Poland’s manufacturers continue to struggle for a decisive lift-off after the spring lockdown.

Pandemic had “increasingly severe effect on supply chains in November, with lead times lengthening to the third-largest extent in the survey’s history”.