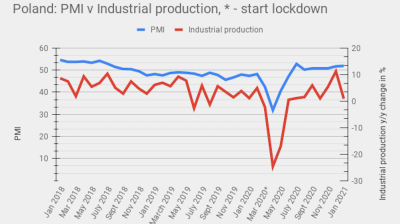 While clearly weakened – mostly due to a negative calendar effect in the first month - growth in output affirms the industrial sector’s post-lockdown recovery despite tighter restrictions at home and abroad, as Europe continues efforts to contain the COVID-19 (coronavirus) pandemic.

“Industrial output increased by 0.9% y/y in January and thus managed to sustain a positive annual dynamic despite the unfavourable calendar effect. The result implies that the resilience of the industrial sector to the ongoing pandemic and restrictions continues at the start of 2021,” Raiffeisen said in a comment.

Seasonally adjusted, industrial production growth proved much stronger, adding 5.7% y/y in the first month after an expansion of 7.1% y/y in December.

Overall, production increased in just 15 out of 34 industrial segments in January in y/y terms. December saw y/y expansion in 28 segments.

“Given the negative calendar effects in January, the next months may again bring y/y increases in most industries,” Raiffeisen noted.

Production of electrical equipment as well as in waste management and recovery, and in computers, electronic and optical devices expanded the fastest. Output in the coking coal and products of oil refinery, as well as in the beverages and pharmaceuticals segments, fell most significantly.

“In the coming months, we can expect increased volatility of real economy data as the base effects from last year will strongly affect this year’s figures,” Erste said.

“Polish manufacturing should continue to benefit from improving sentiment and solid performance of the German economy,” the Austrian bank added.

“The data released today do not change our expectations for this year. The economy has partially adapted to the pandemic and the activity of some sectors of the economy is recovering,” Bank Millennium wrote.

“Our forecast of [GDP] growth of 4.4% this year remains valid. The economic impact of the prolonged pandemic remains a factor of uncertainty, but it seems that progress in the vaccination process should gradually bring stabilization,” it added.

Czechia and Slovakia recorded the highest excess mortality rates in the EU in February
14 hours ago
Polish PPI expansion picks up to 3.9% y/y in March
19 hours ago
Moldova’s currency falls amid weak exports, no grants
1 day ago
Romania’s Chimcomplex shares soar by 29% on WSE listing news
2 days ago
Montenegro’s public debt spikes at 82.48% of GDP in 2020
2 days ago