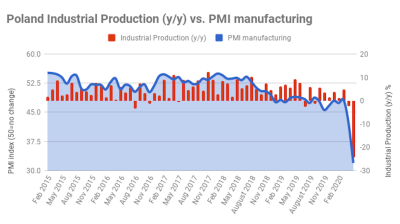 Poland’s industrial production crashed 24.6% y/y in unadjusted terms in April, statistical office GUS reported on May 21. The huge fall follows a decline of 2.3% y/y in March.

A contraction had been expected all along in April, the first full month of lockdown imposed by the government to contain the coronavirus (COVID-19) pandemic. However, the magnitude of the fall surprised the market, which predicted a contraction of around 12%. That might translate into a bigger recession in 2020.

“Our current forecast of GDP falling 10% y/y in Q2 is at a downward risk,” Bank Millennium said in a comment.

Following the disastrous industrial production reading, analysts could now revise their outlooks for the whole of 2020, currently predicting a GDP fall of 4%-5% - although that will depend on readings like retail sales, due tomorrow, and other data.

That said, the outlook for the industrial sector in the coming months can only be optimistic, given the coronavirus restrictions are being gradually lifted, Erste notes.

“[While] today’s reading suggests that the situation in the manufacturing sector is dramatic after the full month closure and returning to full capacity will only be gradual, April was likely the bottom of the current crisis.

“With steady easing of distancing measures since the beginning of May, the industrial output will likely begin to slowly recover,” the Austrian bank added.

Broken down by key sectors and in unadjusted terms, output in manufacturing retreated 27.5% y/y in April, compared to a fall of 3% y/y the preceding month.

Output fell 8.8% y/y in the mining and quarrying sector in the fourth month after declining 4.8% y/y in March. In the utility segment, production slid 1% y/y after growing 4.7% y/y the preceding month.

Production also fell 3.1% y/y in the water supply and waste management segment versus an expansion of 4% y/y in March.

In more detailed terms, production fell in 30 out of 34 branches of manufacturing in annual terms, GUS said.

Carmakers were hardest hit with the segment’s output collapsing 78.9% y/y. Production also contracted 34% in the general machinery segment while falling 28.1% y/y in electrical equipment and 25.9% in the rubber and plastics segment.

Production increased 14.8% y/y in the pharmaceuticals segment although, in m/m terms, it declined as much as 37.2%, GUS also noted.

Romania’s trade gap narrows in May despite weak exports

The foreign trade gap in Romania contracted by 15.6% y/y to €1.25bn in May, but the latest foreign trade numbers don’t bring much optimism.

June was the fifth consecutive month of PPI deflation after factory gate prices decreased 16.4% y/y in May.

May production revived after being dragged down by shutdowns at the Czech Republic's main car factories in April, but the overall increase was softer than expected.

This is the first time since June 2004 that foreigners’ share in the stock exchange has dropped below the 50% mark.

Romania’s trade gap narrows in May despite weak exports
1 day ago
Lithuanian PPI deflation eases to -11.4% y/y in June
2 days ago
Czech industrial production down by 25% y/y in May, up 13.8% m/m
5 days ago
Foreigners’ share at Borsa Istanbul falls below 50%
6 days ago
Albania’s annual CPI inflation slows to 1.8% in June
6 days ago