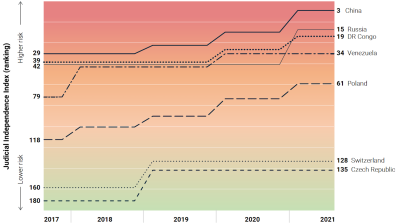 Risks to the independence of the judiciary have increased globally in 2021, with the situation deteriorating most rapidly in Poland, a study by risk intelligence company Verisk Maplecroft said on November 17.

Poland has witnessed the steepest decline in judicial independence of any country in the last four years, dropping from 118th to 61st in the global ranking of the highest risk to overtake Hungary as the worst-performing country in the EU, the study said. The higher the position in the ranking, the less independent its judiciary is.

Since 2018, the ruling Law and Justice party’s judicial reforms have heightened the risk of political intervention in the selection and dismissal of judges, the study said.

The reforms have been denounced as illegal by the EU Court of Justice and have driven Brussels' recent decision to delay the disbursement of funds from the Recovery and Resilience Facility to Poland. Poland has also been fined €1mn a day for not dismantling the new disciplinary chamber of the Supreme Court.

Poland’s Constitutional Court, considered to be heavily pro-government, recently ruled against the primacy of EU law, presenting a serious and direct threat to the rule of law order of the EU.

Poland is just one example of the growing government interference in legal systems, “a trend which is undermining the rights of citizens and comes at the expense of a level playing field for businesses,” the study said.

In the new 2021 edition of the Judicial Independence Index, which assesses the separation of powers, and improper influence in the appointment of judges and legal rulings in 198 countries, the 10 highest risk countries primarily feature authoritarian states. These include North Korea (ranked 1st), Cuba, Laos, and, perhaps most significantly, China, which has replaced Iran as the third riskiest country globally in 2021.

However, rising threats to judicial independence have been witnessed across all regime types. As well as traditional authoritarian countries, such as China and Russia, the data also points to a deterioration in semi-consolidated democracies like Poland, and even consolidated democracies such as the Czech Republic and Switzerland.

In established democracies, the decline is driven primarily by ties between business and politics, where judicial independence is challenged in attempts to protect corporate interests. A notable example of this was seen in the Czech Republic, (ranked 135th, down from 180th in 2017), where Prime Minister Andrej Babis threatened judicial independence in the fight to protect his personal assets.

For authoritarian countries, such as Russia and China, the decline points to a consolidation of power by political leaders. Russia’s poor judicial independence was exacerbated in August 2020 by the introduction of a legal modification that gave the president authority to request the termination of judges’ tenures – placing foreign businesses, NGOs and opposition activists at the mercy of politically biased courts and prompting Russia’s drop from 44th to 15th highest risk on the global ranking.

According to the report, threats to the independence of the courts come at the expense of checks and balances that remain vital to the rights of citizens and the interests of the business community. Motivations for eroding the separation of powers may vary across different countries, but the results for societies are broadly the same.

“As judicial independence comes under threat, so too do the predictable freedoms of those who are not aligned with the stance of the state, including opposition activists, reporters, political figures, and judges,” said Capucine May, the study’s lead analyst.

“Companies on the wrong side of the political or geopolitical fence in ‘high’ risk countries will certainly be at a disadvantage while deteriorating human rights conditions pose real risks to the operating environment and the ESG profiles of companies deemed to be working alongside the worst-performing governments.”