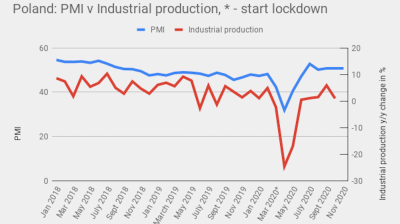 The reading keeps the index just above the 50-point line separating contraction from growth for the third month straight. That shows Poland’s manufacturers’ continued struggle for a decisive lift-off after the spring lockdown.

“That said, the downturn in demand remained far less severe than during the spring lockdown,” the index’s compiler added.

The sustained fall in new work weighed on production in November, as a decline was registered for the first time in five months. The rate of contraction was only modest and weaker than those seen from March through to June.

The raging COVID-19 (coronavirus) pandemic also had an impact through workers’ having to isolate in case of infection or contact. That was reflected in a second consecutive month-on-month rise in backlogs of work during November. Moreover, the rate of accumulation was faster than in October.

Manufacturers addressed capacity constraints by boosting recruitment for the third month running. The rate of job creation was the fastest since June 2018.

The survey data also linked the drop in production and rising backlogs to supply chain problems. Suppliers' delivery times lengthened the most since May.

With supply chains under pressure and the prospect of future disruption from further coronavirus restrictions, firms built up stocks of purchases for the second month running. In contrast, inventories of finished goods fell for the fifth consecutive month as firms sold off stock due to limited output capacity.

Shortages of raw materials contributed to a faster rate of input price inflation in November, with average purchase prices rising the most since November 2018. Cost pressures remained well above the long-run survey average but output prices were more constrained, rising only modestly.

The outlook for Poland’s manufacturing sector remains uncertain because of the surging second wave of the coronavirus pandemic. The number of new daily cases has been in decline recently but there are doubts over the reliability of data. Poland’s testing capacity is also strained.

Current forecasts for the Polish economy are of a recession of around -3% to -4% in 2020, an unprecedented downturn but still only a nuisance compared to the crises in Italy or Spain. The Polish economy is expected to expand 4% in 2021.

But with the number of new coronavirus cases increasing fast, the government has brought some restrictions back and the discussion about a full lockdown is underway. The second wave of the pandemic could thus rewrite expectations for Polish growth in 2020.

Higher borrowing by the governments of Bosnia’s two entities pushed up turnover — mainly trading in government bonds and T-bills — on the Sarajevo and Banja Luka exchanges, but the main indexes dropped.

Romania's construction work index increased by 7.8% y/y in November, a robust growth yet slower than in previous months of the year.

Support for EU accession has increase significantly compared to 2019 when about 66% of citizens were in favour shows survey commissioned by EU delegation to Montenegro.