Poland struggles to cope with biggest refugee wave since WWII 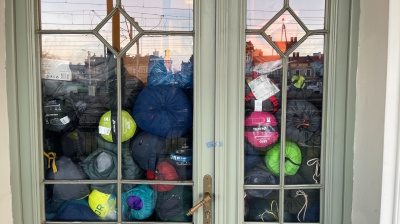 Poland, which had said a few weeks before the Russian attack on Ukraine that it could welcome “even up to one million refugees”, has gone on to face that very situation by just the 12th day of the war.

Since the first Russian battalions entered Ukraine on February 24, nearly 1.07mn refugees have crossed into Poland, the Border Guard said in its latest update on March 6. “The traffic on the border is growing with 42,000 people arriving only [on March 7] by 7am,” the Border Guard said.

As the fighting continues, there is every chance that there will be many more refugees. That is unprecedented for Poland, which has not seen a similar migration since World War 2, when two million Poles resettled from the then Soviet Union – but over two years.

It is shortly past noon at the train station in Przemysl, a town of 60,000 at the foot of the Carpathian mountain range. The station’s main hall is brimming with people. Another train has arrived from Lviv, Ukraine’s seventh largest city, a place of refuge that has yet to see what residents of Kyiv, Kharkiv and other Ukrainian cities further east have endured for nearly two weeks now.

Roman Ishchuk, 36, is a restaurant worker from Kyiv, who has just arrived in Przemysl after a four-day ordeal that involved leaving the capital on an evacuation train.

“When I got to the [Kyiv] train station, it was full of panicking people. I’ve never seen anything like this. It was terrifying,” Ishchuk says, while he takes a cigarette break outside the station with a friend, Irina Lisginskaya, 19, a Kyiv student. “We only got on the train after they added extra cars to it,” he says.

Ishchuk hopes to return to Kyiv to fight but hundreds of thousands of refugees – mostly children, women, and the elderly – will be staying in Poland, probably for many months, if not years.

There were already at least one million Ukrainians in Poland before the war, economic migrants who had come over the past few years to find better jobs. The informal compatriot network of the Ukrainians, together with the mobilisation of Polish society and the NGOs, has helped Poland just about cope with the fast-rising wave.

Daria Dehtierova, 30, has only recently returned to Poland – where she has lived since 2020 – from Kharkiv. She is lucky. By the time she arrived in Poland, Kharkiv, Ukraine’s second biggest city with more than 1.4mn people, is being shelled daily, with no humanitarian corridor in sight – despite Russia’s assurances. Ukraine’s “capital of students” has seen thousands flee, not just Ukrainians but also people from Africa and the Middle East who had come there to study.

“I heard something outside and realised they had started shelling us. My brother told me I should leave immediately,” Dehtierova says. She has arrived from Poznan, western Poland, where she lives, to help as a volunteer in Przemysl.

Since the war began, the refugees have relied on people like her. Grassroots initiatives are in the thousands, raising money, collecting clothing, hygienic items and food, and finding shelter for the refugees, often in ordinary Polish homes.

Social media are filled with cross-messaging about who is doing what and where to help.

“I am on the lookout for an inexpensive apartment with 2-3 rooms for a Ukrainian family to rent. A total of six people including two children. Proximity to school and kindergarten important, as well as good access to the internet. Maybe someone has a free apartment in a city or small town? Warsaw has overwhelmed them in terms of price,” is a common type of social media post.

This grassroots effort has won Poland some much needed good publicity, even if there have also been reports of discrimination against dark skinned refugees, something also visible in the country's ongoing pushback policy against Middle Eastern refugees entering the country via Belarus.

As the number of refugees grows, however, there is more and more questioning of the government’s strategy to cope with the mass movement of people. Sooner or later, NGOs warn, the early solidarity could wane and there will come a time for a top-down effort to integrate refugees – to help them find jobs, put their kids in kindergartens and schools, and ensure they have access to healthcare.

The Polish government said on March 7 that it would adopt a special law to help refugees from Ukraine that could cost some PLN1.8bn to PLN3.5bn (€700mn) a year.

The basic premise of the law – which will be fast-tracked through the parliament, with the opposition likely to give it overwhelming support – is that refugees will be given the right to stay in Poland for 18 months with minimal formalities. They will also have an option to stay for another 18 months – so three years in total.

The government also plans to pay Poles who will host refugees in their homes PLN1,200 (€242) a month for two months per person to help meet the financial cost of help. Local authorities will receive money from the central budget to finance public education for refugee children or to ensure refugees are covered by the public healthcare system.

“Refugees from Ukraine must know that they can live their lives as close to normal as possible in Poland,” Prime Minister Mateusz Morawiecki told a press conference on March 7.

But Polish NGOs have criticised the government’s approach – the idea to pay people for housing refugees in particular. That smacks of privatising humanitarian aid, says Weronika Samolinska, who has been working with Ukrainian refugees since the war began.

“It’s going to be impossible to control the living conditions of almost a million people. Volunteers at train stations are not going to be able to check who they send families with children to. Will refugees end up with someone truly willing to help or with someone in it for the money only?” Samolinska warns.

The economics of herding in Mongolia
21 hours ago
EXPLAINER: how a price cap on Russian oil might work
1 day ago
Russia catches a nasty dose of the Dutch Disease
1 day ago
Sky-high inflation forces more Russians to take out “pay-day” loans
4 days ago
Death of China-to-Russia cargo transit routes means it’s all aboard for Kazakhstan
4 days ago