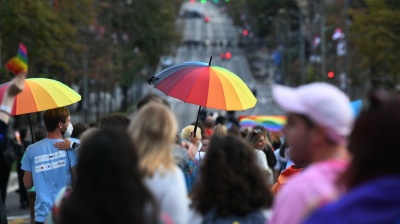 Serbian riot police clashed with anti-LGBT protesters in the capital Belgrade on September 17, as a last minute government decision allowed the EuroPride march to go ahead.

The Serbian authorities had previously banned the march, warning that they could not ensure participants’ safely. However, Prime Minister Ana Brnabic formally announced earlier on September 17 that the march could go ahead and participants’ safety would be ensured.

Several hundred people joined the Pride parade — which took place along an amended route — despite the controversy and heavy rain on the day.

“As @Europarl_EN Standing Rapporteur for #Serbia, I stand here with you not only as a European politician, but as someone who celebrates diversity and fights for equality,” tweeted Bilcik, who spoke at the event.

Earlier on September 17, protesters against the march clashed with police, throwing bottles, stones and stun grenades at a police cordon. At least two attacks on journalists were also reported.

Reports from Belgrade say some opponents of the march carried Russian flags; these had previously been evident at earlier protests against the EuroPride event along with portraits of Russian President Vladimir Putin.

Prime Minister Ana Brnabic told an extraordinary press conference after the EuroPride march that around 5,200 police had been deployed on the streets of Belgrade.

10 police officers were slightly injured, while vehicles were damaged. 64 people were detained in total. However, Brnabic said there were no serious incidents and that only two slightly larger conflicts were recorded.

Brnabic, who is emerging Europe’s first openly gay prime minister, thanked Serbian citizens who “showed tolerance and understood the calls of the state”, and said she was proud that the day passed without major incidents.

“We opened a debate that is extremely important for our society and it would not be possible without EuroPride. With the support of the EU, we are changing Serbia at least a little for the better, the fight continues and we will continue to fight,” said the prime minister, according to a government statement.

Interior Minister Aleksandar Vulin stressed that the ministry “will not tolerate any violence on the streets of Belgrade”.

The government had been under heavy pressure from EU officials and western politicians, as well as local and international rights groups, to allow the march to go ahead.

The organisers insisted through the week that they would not give up plans to hold the march.

Just hours before the march was scheduled, Brnabic announced that it would go ahead, and said that she could guarantee that the streets of Belgrade would be safe.

According to local media reports, while Brnabic did not take part she was represented by her partner.

”We are overjoyed that the Prime Minister has kept the promise she made in 2019 to support EuroPride in Belgrade. EuroPride is a celebration of love, a movement for equality, and part of a global campaign for human rights. It embodies European values and is a threat to no one and certainly not to Serbia.” Kristine Garina, president of the European Pride Organisers Association which licenses EuroPride, earlier on September 17.

”The test of the Prime Minister’s statement will be a successful and safe EuroPride March this afternoon. She spoke of her pride that the first EuroPride outside the European Economic Area is taking place in Serbia, and we hope that this will be demonstrated on the streets this afternoon.”

The debate over whether the event would go ahead highlighted tensions within Serbia, an aspiring EU member, but where traditional values still hold strong, as in many countries in Central and Eastern Europe.

Announcing the initial decision to ban the event, President Aleksandar Vucic said the government had been under heavy pressure from right-wing groups and representatives of the Serbian Orthodox Church to cancel the parade.

Vucic later described Serbia as the stage for a proxy war between East and West, speaking to Reuters on August 29.  Commenting on a protest at the end of August, Vucic told the newswire: "I cannot say that it was a proxy attack, because there were many ordinary people there ... but whether there is a proxy conflict in Serbia ... there is one, no doubt about that, East and West.”

The EU candidate countries in the Western Balkans have made more progress on reforms positively affecting LGBTQI+ people than the EU members from the region. Montenegro has the best legal and policy environment for LGBTQI+ people in the emerging Europe region, according to the Rainbow Europe Map and Index from International Lesbian, Gay, Bisexual, Trans and Intersex Association in Europe (ILGA-Europe). Montenegro was the top ranked country from the emerging Europe region and is only outperformed by 10 West European countries (Malta, Belgium and Luxembourg top the list).

For the next three years the government banned the march, which it assessed as a “high-level risk” event. However, Pride resumed in 2014.