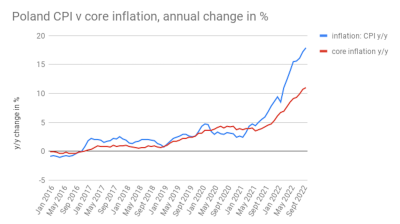 Core inflation growth tracks the expansion of consumer prices (CPI), which also accelerated in October, coming in at 17.9%, a gain of 0.7pp versus the preceding month.

The government says inflation is due to Russia’s war against Ukraine and the high commodity and energy prices that the aggression caused.

The government also hopes that the National Bank of Poland’s tightening of monetary policy - which saw its reference interest rate raised from 0.1% to 6.75% - would eventually reduce demand strongly enough for inflation to start falling.

At the same time, the NBP is wary to raise interest rates more to avoid the risk of too steep an economic slowdown. The NBP kept its interest rate unchanged for a second consecutive time in November.

In m/m terms, core inflation grew 1% in October, easing versus a gain of 1.4% m/m in September, the NBP data also showed.