Polish CPI growth confirmed at 13.9% y/y in May as inflation spreads throughout economy 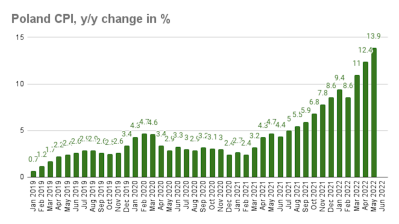 The reading confirms GUS’s flash estimate published at the end of May while adding details as to the structure of price growth – which shows that inflationary trends in the economy are far from losing momentum.

Analysts now pencil in 15% y/y – 16% y/y peak CPI growth in August or September,with major risks to the upside linked to the “unpredictable effects of hostilities [in Ukraine] and the policy of restrictions and possible disruptions or blockades of raw material supplies from Russia”, Bank Millennium wrote in a comment.

The incoming food crisis and turbulences in the wake of the EU’s weaning itself off Russian energy supplies will also play an important role in how inflation will shape up in the coming several months until mid-2023.

By then, inflation should begin to weaken due to the statistical base effects and the impact of the National Bank of Poland’s (NBP’s) aggressive rate hike policy. The NBP has raised its reference interest rate nine times in as many months between October and June from 0.1% to 6%.

The currently expected target interest rate is around 7%-8%, analysts say.

Monetary tightening is expected to lead to a slowdown in economic growth later this year and in 2023, apparently the only plausible scenario in which inflation is contained.

Inflation and the central bank's fight with it are also fast becoming a political problem for the government, as price growth is eating into Poles' incomes, while the NBP's monetary tightening has pushed up mortgage repayments significantly.

Prices in the transport segment again led growth in May, expanding 25.8% y/y, GUS showed in the breakdown of the data. That included a jump of 35.4% y/y in the fuels segment.

Inflation is much demand-driven, as core inflation – which does not take into account changes in energy, fuel and food prices – came in at 8.4% y/y in May, the highest reading since the recording of the indicator began in 2001.

“In conditions of still strong demand, companies are [still] able to shift the high costs of production and supplies to retail prices,” Bank Millennium noted.

Russian economy stable in May, but demand and income contraction deep
1 hour ago
CEE Economic Sentiment Indicators fall on polycrisis woes
4 hours ago
Europe’s gas storage on track to meet 80% full by start of heating season
1 day ago
Kosovo’s population dropped to 1.77mn in 2021 as emigration outweighed natural increase
1 day ago
North Macedonia’s PPI jumps 21.7% y/y in May
1 day ago