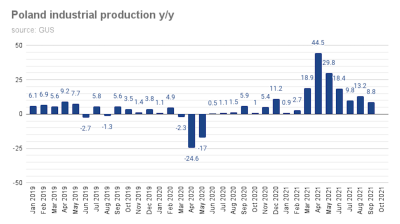 The weaker growth was expected due to a higher reference base from the same month in 2020 as well as fewer working days but still came above the consensus, which assumed expansion of 8.2% in y/y terms.

“Industrial production data are good information showing the strength of the Polish industry and its resilience to bottlenecks in the supply of raw materials and intermediate goods,” Bank Millennium said in a comment on GUS figures.

That is due to the Polish industrial sector’s smaller dependence on external suppliers than in Western Europe, Bank Millennium adds. Polish exporters also remain competitive in terms of pricing.

Broken down by the main segments, output grew an unadjusted 7.9% y/y (+13.3% in August) in manufacturing. Production also expanded 11.7% y/y in water supply and waste management, keeping the growth rate from the preceding month.

Overall, production increased in 30 out of 34 industrial segments in September in y/y terms, compared to292 in August.

The outlook for the sector is broadly favourable.

“In coming months industrial production growth should remain solid but supply-side issues and rising prices might weigh on the performance of some of the sectors,” Erste wrote.

“Even with the increasing PPI, which may weigh upon demand, we do not expect a recession in the industrial sector throughout 2022,” Bank Millennium said.

Poland suffered a pandemic-driven recession of 2.7% in 2020, one of the mildest contractions in Europe. The country’s GDP is projected to expand strongly at around 5% in 2021. The explosion in the number of new COVID-19 (coronavirus) cases remains a risk factor, however.