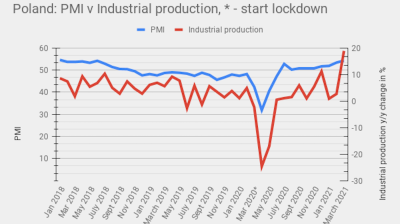 The expansion was considerably above consensus, which expected growth of 12.6% y/y, assuming that the acceleration would happen against a very low base in March 2020, caused by the pandemic lockdown, and also thanks to more working days.

Production of investment goods also grew fast in March, although that also was for export, as Polish companies remain reluctant about investment due to the persisting uncertainty about the government’s handling of the coronavirus (COVID-19) pandemic.

Overall, production increased in 27 out of 34 industrial segments in March in y/y terms. February saw y/y expansion in 17 segments.

“March data on industrial production suggest that GDP decline in the first quarter will be less than 2% y/y. But we have yet to see how retail sales have endured increased restrictions at the end of March,” Santander Bank Polska said in a comment on GUS' figures. Retail sales data are published today.

Barring an unexpectedly dramatic turn in the course of the pandemic, analysts agree that Poland’s economy will recover this year, growing 3-4%. Last year saw a recession of 2.7%.

Belarus' gold and foreign currency reserves rose 4.9% to $7.3bn as of May 1
28 minutes ago
Ukraine's international reserves increased to $28bn as of the start of May
1 hour ago
Ukraine’s consumer price inflation slowed to 8.4% in April
1 hour ago
Romania’s retail sales up 4.1% y/y in Q1
3 days ago
ING: Inflation pressure continues to build in Poland
3 days ago