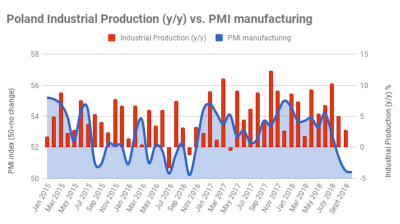 The indicator fell in the fourth consecutive month in October, strengthening worries about expansion in Poland’s industrial sector having peaked, setting conditions for a slowdown in GDP growth in the second half of the year.

“Polish manufacturing remained in the doldrums in October with the PMI hovering just above the neutral threshold and at the lowest level in two years,” IHS Markit director Trevor Balchin said in a comment.

The Polish PMI has remained above the 50-point threshold separating stagnation from growth for 49 months straight now.

At 50.4, however, growth is feeble, suggesting weaker data from the industrial sector might be coming. Industrial production growth slowed down to just 2.8% y/y in September (5.4% y/y upon adjustment). Data for October is due later this month.

Weak exports again proved to be a key factor behind the PMI’s fall in October, falling for the third month running and at the fastest rate in six years, IHS Markit said. Total new orders were broadly flat as a result and this prompted manufacturers to cut staff for the first time in over five years.

The weakness of exports owes to reduced demand from EU markets, Germany in particular, Polish companies noted in responses to the PMI survey, the index compiler said.

Other elements of the index performed below par as well. The volume of backlogs in the sector declined for the third month running, and at the fastest rate since June 2017.

The rate of input price inflation accelerated, although at the weakest rate in five months, IHS Markit said.

In effect, “the 12-month outlook for Polish manufacturing output dimmed in October, moderating for the fifth successive month to the weakest since January 2013,” IHS Markit said.