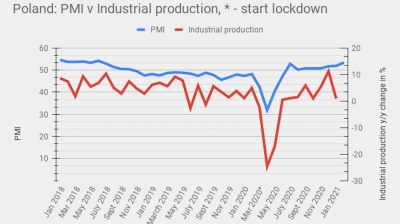 The reading also keeps the index above the 50-point line separating contraction from growth for the eighth month straight. The index’s expansion strengthens the outlook for recovery in Poland’s manufacturing sector in 2021 after the COVID-19 (coronavirus) pandemic ravaged output and sentiment last year.

“The headline figure was lifted by four of its five components during the month, the exception being stocks of purchases,” IHS Markit said.

“New orders rose at the fastest rate since last July, and at the second-strongest pace in over two-and-a-half years. Exports boosted overall inflows of new work, rising the most since September 2017. Production rose for the first time in four months, and at a rate broadly in line with the long-run survey average,” the index’s compiler added.

Despite higher output, backlogs of work increased at the fastest rate since January 2007, indicating rising pressure on capacity amid raw material shortages.

Suppliers' delivery times lengthened to the third-greatest extent in the survey history. During March and April last year – the months of the first lockdown shock -  delays had been more severe.

Employment increased for the sixth month running, and at the fastest rate since June 2018. Purchasing of inputs increased at a rate broadly in line with new orders, but supply chain delays meant that firms had to use existing stocks in production. Inventories of inputs fell for the first time in five months, following a survey-record increase last December.

Meanwhile, input price inflation rose in February at the sharpest rate for a decade, and at the fourth-fastest pace on record since the survey began in 1998, according to IHS Markit.

“Anecdotal evidence revealed that global raw material shortages and logistical problems at borders pushed up costs, exacerbated by the weak zloty,” OHS Markit said. Companies passed on higher input prices to customers, with output prices increasing at the fastest rate since May 2004, it added.

The outlook for Poland’s manufacturing sector remains promising. Many companies are expecting double-digit increases in sales by February 2022 as the economy recovers from the coronavirus pandemic, the PMI survey showed.

As has been the case since the onset of the pandemic, however, the positive outlook is clouded by uncertainty regarding the currently surging third wave of infections and the pace of vaccinations.

Real economy data also confirm an upturn in Poland’s industrial sector, even if its pace is very uneven. Poland’s industrial production growth eased to just 0.9% y/y in January, after jumping 11.2% y/y the preceding month, Poland’s statistical office GUS said in February. The February reading is due later this month.

Also, the fall in Poland’s GDP surprised to the upside in 2020 with a contraction of just 2.7%, GUS said last week. That is the worst result in three decades but still only a nuisance compared to the crises in Italy or Spain.

The Polish economy is expected to expand around 4% in 2021 on the back of reinvigorated household consumption, exports, and – to a smaller extent – investment.

Russian industrial output back to 1.1% growth in March

The National Bank of Ukraine (NBU) raised Ukraine’s prime rate by a full percentage point, to 7.5% on April 16, more than analysts anticipated, after inflationary pressures surged in March.

The National Bank of Ukraine (NBU) is expected to raise its prime interest rate on April 15 in order to combat rising inflation, according to a Reuter’s poll of analysts, the newswire reported on April 14.

Romania’s construction works down 0.6% in 2M21
17 hours ago
Turkish Airlines flies only 2.5mn passengers in March
1 day ago
Russian industrial output back to 1.1% growth in March
2 days ago
NBU hikes rate 100bp to 7.5%
2 days ago
NBU expected to hike rates on rising inflation
4 days ago