Polish PMI surges to a new all-time high in June 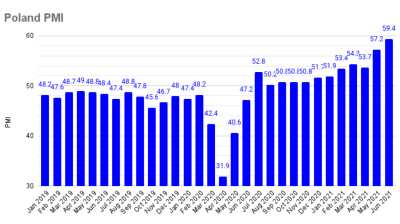 July was thus the 12th consecutive month with the index above the 50-point line separating contraction from growth. The reading signalled “a rapid improvement in manufacturing business conditions in Poland”, IHS Markit said.

New orders rose for the seventh month running, and at the fastest rate since February 2014. While new export business expanded at a rate close to March's 89-month record, it was the domestic market that provided the main impetus to sales in June.

Production rose for the fifth consecutive month in June, and at the strongest rate since January 2017. Despite the faster increase in output, backlogs grew for the ninth month in a row and at the fastest rate since the series began in 2003, a clear sign of rising pressure on manufacturing capacity.

To increase capacity, manufacturers added to payrolls for the tenth consecutive month in June. The rate of job creation was the strongest since April 2017. Meanwhile, purchasing activity rose at the sharpest rate since May 2004, resulting in the fastest expansion in input stocks at manufacturers in the survey history.

This reflected concerns over disruption to output from supply delays, with suppliers' delivery times lengthening to a record degree in June.

Raw material shortages and transportation bottlenecks drove input prices higher in June. The rate of inflation hit a new record high for the fourth month running, as did that for output prices as firms passed on greater costs to clients.

Poland’s PPI growth has kept accelerating since January, high-frequency data show. The rising industrial prices will also fuel growth in headline inflation, which remains elevated at over 4% y/y, even if the flash June reading indicated a slowdown in growth by 0.3pp to 4.4% compared to May.

That could push the Monetary Policy Board – the central bank’s rate-setting body – to hike the currently super low interest rates this year, analysts say. Poland’s interest rates were slashed to just 0.1% over a year ago in an attempt to keep the economy going during the pandemic.

Poland’s economy is indeed in for a boom, PMI and other data suggest.

“Polish industry has long made up for the losses caused by the pandemic and is on an upward trajectory, which in our opinion will be slightly corrected in the near future, due to the consolidation of demand for services. In the coming years, however, the domestic industry will be a factor driving [Poland’s] economic growth,” the central bank said.

Poland's GDP is currently expected to grow 4%-5% in 2021 on the back of reinvigorated household consumption, exports, and – to a smaller extent – investment. The outlook is roughly 1pp higher than expectations published earlier this year.

Prices of bread and flour products in Kosovo jump by up to 50%
11 hours ago
Bank lending in Georgia up 12.9% y/y at end-September
11 hours ago
National Bank of Ukraine leaves key policy rate unchanged at 8.5%
13 hours ago
Kazakh industrial output up 2.7% in first nine months
4 days ago
Slovak unemployment rate at 7.09% in September
4 days ago