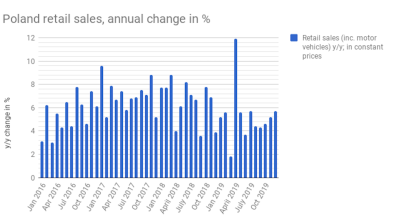 The reading marks a gain of 0.5pp in retail turnover growth in comparison to the y/y expansion recorded in November. The expansion in December is hardly a surprise even if it fell slightly short of consensus. Poles’ robust consumer spending is driven by the good situation on the labour market, growing wages in particular.

The Law and Justice (PiS) government also expanded its flagship programme of monthly child benefit of PLN500 (€114) to encompass virtually all children in Poland. That also had an effect on consumption although analysts expect that to wither in 2020.

Driven by consumption, Poland’s GDP growth came in at 5.1% y/y in 2018, the fastest expansion in over a decade. The economy slowed down its growth to an unadjusted 3.9% y/y (4% y/y upon adjustment) in the third quarter – still a show of resilience amidst the worsening of the external environment.

All but one retail segments expanded y/y sales in constant prices in December, GUS data showed. Turnover in the domestic appliances, furniture, and audio-video equipment segment grew the fastest, at 13.6% y/y, followed by an expansion of 10.6% y/y in sales in “in non-specialised stores”.

In current prices, retail sales grew 7.5% y/y in December versus an expansion of 5.9% y/y the preceding month. In monthly terms in current prices, there was a jump of 14.6% that followed a fall of 2.3% m/m in the eleventh month. Sales accelerating m/m owed to increased spending during the Christmas season.

Analysts forecast a further slowdown in the first half of 2020.

Russia’s weekly inflation remained at 0.1% week-on-week on the week of February 10, with the daily inflation slowing to 0.01% after an acceleration over the first few days in February, according to Rosstat statistics agency.

Capital estimates economy expanded 1.5% q/q in Q4 with looser fiscal and monetary policy as drivers. But signs are pressure on lira likely to mount. Central bank expected to hike rates by second half.