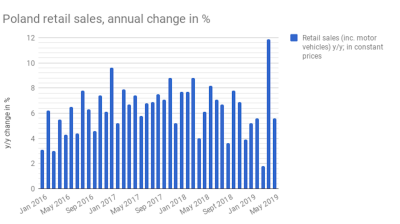 The reading marks a slowdown of 6.3pp in retail turnover growth in comparison to y/y expansion recorded in April. The reduction was expected after sales spiked the previous month because of Easter but still is in line with Polish households’ general inclination towards increased consumption, driven by the good situation on the labour market – low unemployment and growing wages.

Poor weather could also have impeded growth of retail sales in May, Bank Millennium suggests.

“Consumer sentiment remains high. This, combined with households’ good income situation, supported by social benefits, will support private consumption, which will remain the main driver of economic growth,” the bank said in a comment on the GUS’ release.

Poland’s GDP growth came in at 5.1% y/y in 2018, the fastest expansion in over a decade. The economy also expanded 4.7% y/y in the first quarter in adjusted and non-adjusted terms alike in a show of resilience amidst the worsening of the external environment.

All but one retail segments expanded y/y sales in constant prices in May, GUS data showed. Sales of cars, motorcycles, and car and motorcycle parts grew fast at 16.6% y/y. Sales of furniture, audio-video equipment, and domestic appliances also expanded 16.6% on the year.

Following Easter surge, sales of food, drinks, and tobacco products grew just 0.9% y/y. Fuels sales inched up 0.4% y/y while textiles, clothing, and shoes was the only segment to see sales retreat, at 0.1% y/y.

Russia's services PMI falls for second month due to impact of coronavirus
57 minutes ago
Romania’s industrial prices surge by 26.8% y/y in October
1 hour ago
Service sector and public spending save Hungary’s Q3 GDP
1 day ago
Kazakh manufacturing PMI shows return to contraction in November
1 day ago
Poland’s PMI climbs to highest point since August
1 day ago