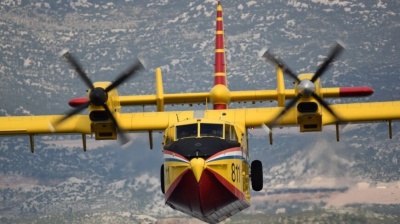 Two members of the three-member Bosnian presidency have asked the high representative of the international community in Bosnia & Herzegovina to use his powers to enable the use of resources of the Bosnian Armed Forces to respond to fires that are active in several parts of the country.

Due to numerous fires in Herzegovina, local authorities have asked the Bosnian armed forces to send helicopters to help put out the fires. However, the requests were reportedly blocked by the Serb member of the Bosnian presidency, Milorad Dodik.

By law, the agreement of all three members of the presidency is necessary for the use of the armed forces.

The other two members of the presidency, Sefik Dzaferovic and Zeljko Komsic, discussed the issue on Monday and decided to ask Christian Schmidt, who is tasked with overseeing the civilian implementation of the 1995 Dayton Peace Agreement in the country, for help.

It was not announced after the meeting whether an agreement had been reached with the high representative, though he did issue a statement calling for a "proper response" to the wildfires.

A statement from the office of the high representative said: “Wildfires are threatening parts of Bosnia & Herzegovina and that requires a proper response. Protection and rescue in response to natural disasters is a humanitarian issue that impacts all citizens in affected areas.

“[The] High Representative views this as an obligation for all to engage responsibly and do the right thing in order to be able to provide citizens with the appropriate assistance, whether domestic or international.

“The High Representative expects relevant domestic authorities to act within the scope of their responsibilities and address the pressing needs of local communities in areas affected by wildfires. In addition, the High Representative is following the situation closely and has requested detailed information from relevant agencies in order to be able to assess the gravity of the situation," the statement concluded.

Past disagreements between top-level politicians in Bosnia have also damaged the country, including by hampering efforts to secure funds from the International Monetary Fund (IMF) or progress towards EU accession.

One of the worst affected areas by the fires is Jablanica in Herzegovina-Neretva Canton, a popular tourist destination. The mayor of Jablanica, Damir Sabanovic, has filed a criminal complaint against Dodik.

A statement from the municipality said the complaint had been filed against Dodik, saying that by refusing to consent to the use of Bosnian air force helicopters he is “knowingly and intentionally harmed another, and in this case failed or refused to react, and committed a criminal offence by failing to perform his official duties”.

The criminal complaint states: “the consequences of the suspect's failure to act, ie failure to take actions for which he is authorised and obliged to take, the damage is increasing and the consequences are increasing because the fire is spreading and endangering protected endemic plant species at Plasa-Cvrsnica a total of 70 or more protected areas of nature.”

In the meantime, Croatian Air Force fire-fighting planes managed to contain three wildfires in the Siroki Brijeg area, while many fire sites are still active in the Mostar and Jablanica areas.

A statement from the Croatian defence ministry said that Canadair CL-415 aircraft from the Firefighting Special Forces of the Croatian Armed Forces was sent to Bosnia to provide humanitarian assistance in extinguishing fires.

"The Air Force of the 855th Fire Squadron is engaged for the fourth time in the territory of Bosnia and Herzegovina, where they provide humanitarian assistance in extinguishing fires,” said Defence Minister Mario Banozic, according to the statement.

“This is another proof that the Croatian Army is ready to respond and make available its capacities to countries seeking assistance in order to strengthen the existing forces for responding to disasters and catastrophes, which are used after all national capacities of the country requesting assistance have been used.

Bosnia is just one of numerous countries across Southeast Europe to have been affected by wildfires. Albania, Greece, North Macedonia and Turkey have all be fighting wildfires since the end of July.
Read in IntelliNews Pro
Get IntelliNews Pro