Two thirds (67%) of Ukrainians approve of the presidential activities of President Volodymyr Zelenskiy, the poll showed.
By Ben Aris in Belrin July 15, 2019

Hopes for change are high ahead of Ukraine’s general election due on July 21, according to a new poll from the International Republican Institute (IRI).

“The relatively high levels of optimism revealed in this poll are a promising sign for the health of Ukrainian democracy ahead of July’s snap parliamentary elections,” said IRI regional director for Eurasia Stephen Nix. “It is crucial that the government and the new parliament demonstrate their determination to live up to the hopes placed in them by redoubling their commitment to addressing the issues that matter most to the Ukrainian people.”

The survey also shows a continued increase in support for the country’s further integration with the West: 59% of Ukrainians favour European Union integration and 53% support Nato integration.

The poll indicates that Ukrainians remain committed to their country’s territorial integrity: 84% of respondents believe that the territories currently under the control of the so-called “Donetsk People’s Republic” and “Luhansk People’s Republic” should remain a part of Ukraine, consistent with previous polling. The poll also shows that 45% of Ukrainians regard a resolution to the war in Donbas as the best way to increase their trust in the parliament, followed by improving the economy (34%) and fighting corruption (30%).

Ending the conflict in Donbas and putting a stop to the endemic corruption remain the dominant demands of voters. Zelenskiy is still riding a wave of popularity and hope and his party, Servant of the People (SOTP), looks set to win by far the largest share of the vote and could possibly win an outright majority.

The elections are dominated by the deep disappointment caused by the failures of the previous government to fulfil on the promises inherent in the Euromaidan popular uprising that ousted the deeply corrupt government of Viktor Yanukovych. While the administration of President Petro Poroshenko that replaced him did make some reforms (notably to the banking sector) the standard of living continued to fall and nothing of note was done about corruption. 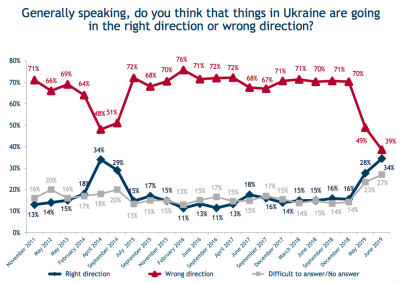 Moreover, the economic situation in Ukrainian households has recently improved somewhat with the economy stabilising and economic growth starting to make itself felt. Previously those that said their economic situation had gotten worse was 65% but that is now down to 40%, according to IRI. 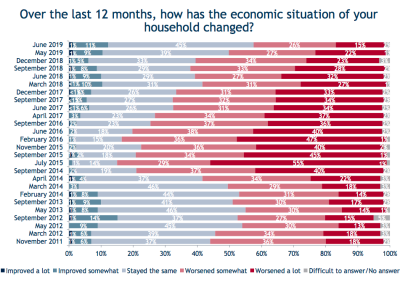 SOTP is in the clear lead in advance of the vote, although the spread amongst pollsters of the share of ballots it will win is wide, ranging from 48% down to IRI’s 34%, although IRI also found that among those that have already decided to vote and have already chosen a party, 50% of those voters will vote for SOTP. It is already clear that SOTP will lead the government, but the open question is with whom it will join in a coalition. 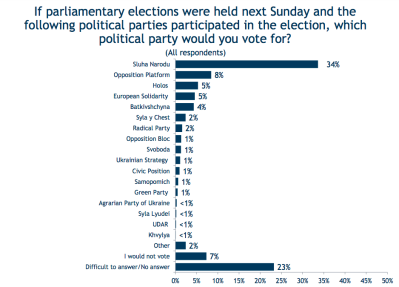 The preferred policy goals are clear and remain little changed from before: end the fighting in Donbas is the clear leader followed by improve the economy and end corruption. Notably the return of the Crimea to Ukraine is not an issue that concerns most Ukrainian voters and ranks low on the list. 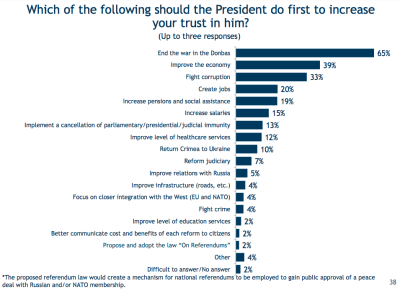