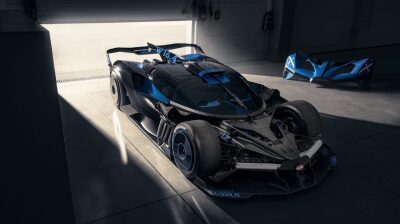 "What we want to do is transition responsibility of Bugatti to Porsche and Porsche in all probability will establish a joint venture with Rimac, with a minority share of Porsche," Diess said at a media conference streamed on the company’s website.

Rumours about a possible acquisition of Bugatti by Rimac were published by the motoring press in September 2020. However, Diess denied the reports that the group plans to sell Bugatti to Rimac.

Earlier in March, Porsche increased its stake in Rimac Automobili from 15.5% to 24% after investing an additional €70mn.

Rimac Automobili develops and produces EV components and manufactures electric super-sports cars. The company has come a long way since it grew out of Rimac's hobby of building and racing electric cars, which began after he converted his BMW 3 Series into an electric car, as bne IntelliNews reported in 2016 following an interview with the company.

As automakers embark on the shift from cars that run on fossil fuels to electric vehicles, companies like Rimac — the company develops and produces electromobility components and also produces its own electric super sports cars — are of great interest. This led not only Porsche but also Hyundai to work with Rimac, signing an €80mn strategic partnership deal to collaborate on the development of two high-performance electric vehicles.

Commenting on the investment when Porsche upped its stake to 15.5% back in 2019, Lutz Meschke, deputy chairman of the executive board at Porsche and member of the executive board responsible for finance and IT, said in a statement: “We quickly realised that Porsche and Rimac can learn a lot from each other. We believe in what Mate Rimac and his company have to offer, which is why we have now increased our stake and intend to intensify our collaboration in the field of battery technology.”

Earlier this year, Porsche CEO Oliver Blume outlined plans to invest $18.1bn in the electrification of its vehicles over the next five years. Speaking to German newspaper Bild am Sonntag, Blume said the automaker wants 80% of the vehicles it sells to be electric by 2030.

Volkswagen Group, which comprises 12 brands including Volkswagen, Audi, Skoda, Bugatti, Lamborghini, Porsche and Scania, spent around €2.7bn on future technologies in 2020, the group said in a March 16 press release. This year it plans a big e-mobility push, aiming to deliver over 450,000 electric vehicles to customers, more than double the 2020 figure.

Kyrgyzstan hits Canadian gold mine operator with $3.1bn fine and unveils law on state takeovers of companies
6 hours ago
ECHR deals big blow to Polish government-dominated top court
17 hours ago
Germany deal to buy Sputnik V dead, but India to receive 360mn doses
17 hours ago
Lukashenko signs decree on the transfer of power in the event of his death
18 hours ago
Amnesty International restores Navalny’s Prisoner of Conscience status
1 day ago