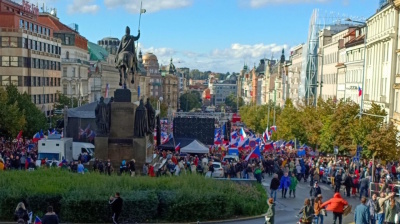 The rally in Wenceslas Square under a mounted statue of the 10th century Bohemian duke. / Roman Maca
By Albin Sybera September 29, 2022

Czech statehood day saw a string of rallies across the country calling for the resignation of Prime Minister Petr Fiala’s cabinet, the largest of which was held in Wenceslas Square in the Prague city centre.

The rally, attended by far-right and some far-left politicians, was called by the same organisers as the previous rally in Prague earlier this month which attracted a crowd of 70,000, shocking many seasoned observers of the far-right scene.

Police estimated the size of the crowdon September 28 at the “lower tens of thousands” and Czech analyst of pro-Kremlin activism in the country Roman Maca estimated the figure at 20,000-30,000 in his Facebook post from the rally.

Organisers Ladislav Vrabel and Jiri Havel demanded the resignation of the cabinet, early elections and that the country is run by “pro-national experts”. They plan to ask President Milos Zeman to “call off the cabinet” on October 10. Zeman has been a long-term ally of Russian President Vladimir Putin and in 2013 he controversially nominated an interim cabinet composed of his political allies when the cabinet of Petr Necas (ODS party) collapsed amid corruption scandals.

“We want to turn political course in our country by 180 degrees. We want to achieve this change through non-violent means”, Havel said from the stage.

The organisers have published a 10-point plan “Czech Republic first” on their website which includes “ensuring direct contracts with gas importers at low prices – that is primarily with the Russian Federation”.

The plan has very nationalist and anti-EU overtones in that “electricity must be delivered by our Czech (not foreign) companies” or that agriculture needs to be “independent of EU subsidies” and “without genetically modified food”.

It also demands that nuclear tenders “must be won by the best companies, and not the companies from countries friendly with the current government”. This is an argument used in the past by politicians such as Karel Havlicek (ANO party) or Martin Kuba (ODS) to unsuccessfully keep Russian state agency Rosatom in the tender for the expansion of the Dukovany nuclear power station.

The two organisers have also organised demonstrations against COVID-19 restrictions and appear to be making money from their activities.

The next rally is scheduled for October 28, the national holiday commemorating the 1918 establishment of Czechoslovakia.

Local media  describe the crowds as largely middle aged and older. They were waving Czech flags and carrying posters referring to Czech national myths, such as one calling for the knights sleeping under Blanik hill to wake up in the country's hour of need.

One demonstrator in Prague told Aktualne.cz journalist Radek Bartonicek, who published interviews at his Twitter account, that “in 40 years  I have never experienced whether I should turn on [my heating] or not” and that “this has to end”.

This man said it has nothing to do with being pro-Russian and people around him agreed, saying they want “peace” and “war to end”, “negotiations with Russia to begin” and “stop sending weapons” which are supposed to be prolonging war in Ukraine. These demonstrators did not express views against Ukraine.

Another man said “we don’t have to hug Vladimir Putin, but this is about business ties and we don’t have that many options”. He added “what I heard is that Putin is interested in talking and closing down contracts” and that “this whole lack [of energy] is created artificially, there is enough gas and electricity but no will”.

Czech singer Ortel, who has a history of racist and white supremacist statements, sung Czech national anthem on stage. Jaroslav Foldyna of SPD, Katerina Konecna of the Czech Communist Party, a socially conservative and pro-Kremlin party, and two German far-right AfD deputies were some of the notable political figures in the Prague rally.

There was a string of related rallies in other large cities, but only in Prague, Brno, Ostrava Pilsen, were crowds described as larger than one thousand. In Brno the estimate is 1,500 according to local police, and Czech Radio gave figure of 1,000 for Ostrava and 1,000-2,000 for the Plzen rally.

The Ostrava rally was organized and addressed by far right and anti-EU SPD leader Tomio Okamura, who said “we don’t want war, we want peace” and called on Fiala’s cabinet to stop the increase in prices.

Okamura also suggested the cabinet nationalises majority-state-owned CEZ to ensure the sale of energy on the Czech market first and guaranteeing of prices and margins reflecting production costs and relevant profit.

The SPD made gains in the recent municipal elections, entering Prague City Assembly for the first time in history.  Recent national polls give nearly 15% support  to the SPD.

Czechia is to hold the second round of Senate elections this weekend, which will largely be a run-off between the populist ANO party of billionaire Andrej Babis and parties of the five-party-coalition of Petr Fiala. Up until now Babis has kept his distance from the rallies, while expressing sympathy for people's anger with the government.

September 28 is the Czech statehood day commemorating St. Wenceslaus, a Bohemian prince murdered by his brother and venerated by the Catholic Church. During the WWII-era Nazi controlled protectorate of Bohemia and Moravia the puppet fascist government attempted to channel Czech nationalism towards the cult of St. Wenceslaus.