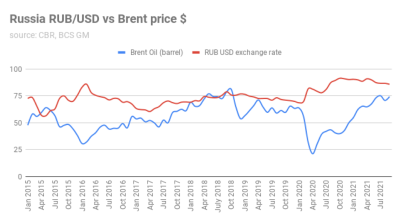 OIl prices have been on a rollercoaster ride in the last two years, but the ruble has remains largely unaffected, as it has decoupled from Brent
By bne IntelliNews October 1, 2021

Oil prices touched $80 per barrel at the end of September and was up 20% in the month as well as 50% since the start of the year. Yet the soaring oil prices have had very little effect on the ruble, which was trading at RUB72.7 per dollar as of the end of September just as the oil price added nearly $10 over the same month.

World market prices for some other export products important to Russia, such as ferrous and non-ferrous metals, wood products and fertilisers, have also risen. This has been passed on to Russian export prices, which have climbed very sharply, and to metals to levels not seen for a decade. The background is the strong growth of demand in the world economy and several commodities, and in the case of oil, e.g. production in some OPEC + countries even fell below the production limits of the agreement, Bank of Finland Institute for Economies in Transition (BOFIT) said in its weekly update

Although Russia's export earnings have naturally increased sharply with the rise in export prices, the ruble has strengthened only slightly. For example, the average exchange rate in September against the dollar was 72.75 as of October 1, down 2% YTD. The ruble has fared even worse against the euro and is less than 1% higher than the average exchange rate in August and is down 8% since the start of the year.

As the Russian economy returns to normal – it has been growing since March and put in a record 10.7% growth in the second quarter against the first quarter on low base effects – the so-called budget rule is back in effect, siphoning excess oil revenues out of the government’s coffers and squirrelling them away in the National Welfare Fund (NWF), which has broken the relationship between the currency and the cost of oil. Capital movements are also playing a role.

“The modest strengthening of the ruble in September suggests that capital flows from Russia may have been significant. This was the case in July and August, when export prices were also rising rapidly and the net inflow of private capital abroad rose to a really significant level, according to preliminary data from the central bank. Also in the past few years, the ruble has developed weaker than export prices,” BOFIT said.

“In addition, currency purchases based on the federal budget rule have been made in recent months at the same pace as the average in 2018–2019. According to the rule, the currencies are converted into additional oil and gas tax revenues from the federal budget, which arise when the price of oil exceeds the reference price of oil specified in the rule. This income is saved and later transferred to the National Welfare Fund, which acts as a state reserve fund,” BOFIT added.