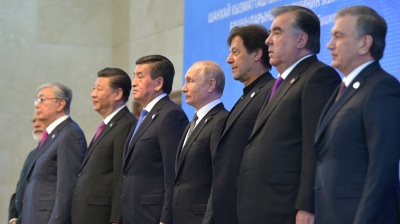 The then leaders of the SCO nations seen at the organisation's 2019 summit in Bishkek, Kyrgyzstan.
By bne IntelIiNews September 9, 2021

The process of admitting Iran into the Shanghai Cooperation Organisation (SCO) is to be initiated at the group’s next summit, Russia’s Kommersant newspaper reported on September 9, citing Kremlin sources.

Iran applied to join the Eurasian political, economic and security alliance as far back as 2008. In the years to 2015, it was not possible to admit Iran into the SCO due to sanctions imposed on Tehran by the UN Security Council. Since then, the refusal of the US to see the Islamic Republic of Iran fully absorbed into the international community—and the reintroduction of heavy sanctions against Iran by the US under the former Trump administration in May 2018—have hindered any potential path Iran might have taken towards joining the SCO, with some existing SCO members not wanting to upset the US by giving the Iranians the SCO stamp of recognition.

According to the newspaper, at the summit, set to take place in Tajik capital Dushanbe during September 16-17, the gathered heads of state are to announce the start of the procedure for finally giving Iran SCO membership. However, it is clear that the accession may take some time and that the process of negotiating the entry may still hit a number of snags.

Tajikistan, which like Iran is one of the world’s two Persian-speaking countries (though Afghanistan has many millions of Persian speakers too), has previously objected to SCO status being bestowed upon Iran during a period when the two countries did not see eye to eye over various matters.

On September 7, amwaj.media reported that the lately installed new president of Iran, Ebrahim Raisi, will fly to the Dushanbe summit and in doing so will be conducting his first overseas trip since taking office.

The SCO is an intergovernmental organisation founded in 2001 by China, Russia, Kazakhstan, Kyrgyzstan, Tajikistan and Uzbekistan. India and Pakistan, which were given SCO observer status at the same time as Iran 13 years ago, were made full members in 2017.

Russian Ambassador to Tehran Levan Dzhagaryan lately said that Moscow fully supports Tehran's aspirations for full SCO membership. “We have close, coinciding positions on a number of international and regional issues. In connection with the SCO summit scheduled for September this year in Dushanbe, I would like to confirm that Russia supports Iran's application for full membership in this organisation," he said.

James Dorsey, senior fellow at the S. Rajaratnam School of International Studies at Nanyang Technological University in Singapore, told the South China Morning Post on August 13 that SCO membership would be in Iran’s interests but China might not want to “rock the boat” by allowing it now.

“China doesn’t want to expose itself to more US sanctions, and so it has struck relatively careful with Iran for the past several years ... It’s clearly not where they want to go, I don’t see that that has changed,” Dorsey was quoted as saying.

Russia could have a “greater interest to poke in the eye of the US than China does at this point”, he added.

The SCO is the largest regional organisation in the world in terms of geographical coverage and population, covering three-fifths of the Eurasian continent and nearly half of the world population.