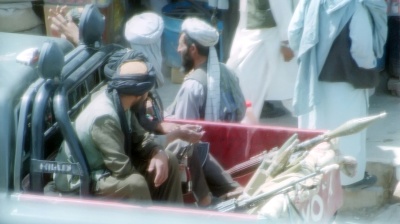 Taliban police patrolling the streets of Herat in a pickup truck.
By bne IntelliNews January 29, 2019

US and Taliban officials have agreed in principle to a peace deal "framework", the New York Times reported on January 28 quoting US special envoy Zalmay Khalilzad, who was speaking after five days of talks between the militant group and the US in Qatar.

Both sides have previously stated that "progress" had been made in the talks aimed at ending the 17-year conflict in Afghanistan. The latest development marks potentially good news for three neighbouring Central Asian countries—Uzbekistan, Turkmenistan and Tajikistan.

What many observers may have missed was the role of the Uzbek-led and Turkmen-supported Central Asian integration efforts in bringing out the militant group’s previously unseen, albeit still complex, proclivity for dialogue. At the heart of Afghan concerns on both sides of the conflict lies the opium poppy cultivation market which stands as a vital part of the Afghanistan’s economy—and Uzbekistan and Turkmenistan have offered the first alternative business in a long time to the crop used as the essential ingredient in heroin production. That fact was precisely demonstrated when the Taliban, to everyone’s surprise, in February 2018 announced support for the Turkmenistan-Afghanistan-Pakistan-India (TAPI) gas pipeline project in exchange for a future share of transit revenues.

Uzbekistan, in particular, has been pushing for peace talks between the Taliban and the Afghan government since 2017.

“We have a draft of the framework that has to be fleshed out before it becomes an agreement,” Khalilzad said in an interview with the New York Times in Kabul on January 28. The militants agreed, as part of the “framework”, to prevent Afghan territory from being used by groups such as Al-Qaeda to stage terrorist attacks—a source of concern for bordering nations.

Other regional projects reliant on Afghanistan
TAPI is not the only Turkmen project that would benefit from a more peaceful Afghanistan. The Asian Development Bank-supported Turkmenistan-Afghanistan-Pakistan (TAP) power transmission line project—essentially running parallel to the TAPI investment—is designed for the annual transfer of at least 2,000 megawatts of power in its first phase, with Afghanistan to receive “$200mn in transmission rights”. A number of similar projects are set to follow as Turkmenistan aims to ramp up its electricity exports to 6.9bn kWh by 2020 up from the currently estimated 3bn kWh. Turkmenistan and Afghanistan in July announced plans to officially launch the Rabat-Kashan to Kalay-Nau 110 kV power transmission line.

Uzbekistan in 2017-2018 moved to cut electricity export tariffs charged to Afghanistan and pledged to help its neighbour build a railway between the two countries “in order to have a direct route to Iran”. The Afghan railway administration earlier noted that the new northwest link would in fact help increase trade between Iran, Uzbekistan, Tajikistan, Kyrgyzstan and China. That would also be in line with China’s massive Belt and Road trade infrastructure initiative which seeks to form transit zones in Central Asia for Chinese goods exports headed to Europe and other destinations.

A Tajikistan poised on verge of economic calamity set for vote

China business briefing: Not happy with Kyrgyzstan
No surprises in Tajikistan as Rahmon retains presidency with 91% of vote
A Tajikistan poised on verge of economic calamity set for vote