Protest in Belgrade as observers point to shortcomings in Serbian elections 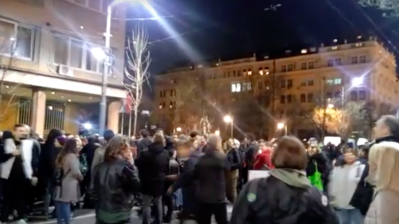 Several hundred people protested in Belgrade on the evening of April 4, the day after Serbia held general, presidential and local elections, demanding a recount of the votes.

The elections delivered yet another victory for President Aleksandar Vucic and his Serbian Progressive Party (SNS) in the presidential and parliamentary elections.

With more than 97% of the vote counted as of 9pm on April 4, the SNS is on 42.93%, giving it 119 seats in the parliament, according to data from the Republic Election Commission (RIK).

The opposition United Serbia alliance is on 13.61%, meaning it is set to take 38 parliamentary seats, and the SNS’ ally the Serbian Socialist Party is just behind with 11.47% and 32 seats. Several smaller parties are also expected to take parliamentary seats, though with some votes yet to be counted it is not yet certain which of these will pass the threshold to enter Parliament.

In the presidential election, Vucic achieved a first round victory, taking 58.56% of the vote, well ahead of his closest rival, United Serbia’s candidate Zdravko Ponos.

This is the first time since the 2014 general election that the SNS has needed a coalition partner to form a government, though it can easily do so with just one of its existing partners, the SPS or the Alliance of Vojvodina Hungarians (SVM).

The party’s presence in the next parliament will be considerably smaller than it had following the 2020 election, which was boycotted by the opposition and delivered the SNS 188 of the 250 seats in an assembly almost exclusively composed of SNS MPs and their allies.

International election observers told a press conference in Belgrade that while fundamental freedoms were largely respected, there were a number of shortcomings that had resulted in an uneven playing field, which favoured the incumbents. 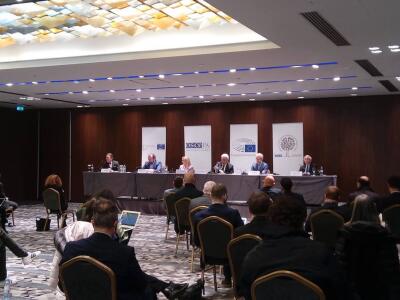 A statement from the OSCE and other international observers detailed unbalanced access to the media, undue pressure on public sector employees to support the incumbents, significant campaign finance disparities and misuse of state resources, according to a statement released following the press conference.

“During the campaign period, some key challenges limited voters’ ability to choose free from pressure or inducement. Along with pressure on public sector employees and the misuse of state resources by state and municipal actors, the observers were also told that excessive budgetary allocations were made to certain categories of voters prior to the elections,” the statement said.

Observers reported that the state broadcaster and other media outlets favoured the incumbent president and the ruling coalition.

“It is regrettable that the public broadcaster and the majority of media outlets were not balanced in their coverage during the campaign,” said Aleksander Pociej, head of the delegation from the Parliamentary Assembly of the Council of Europe (PACE).

Kyriakos Hadjiyianni, special co-ordinator and leader of the OSCE short-term observer mission, talked of the “pervasive influence” of the ruling parties that gave them “undue advantage”.

On a more positive note, international observers welcomed the return of opposition parties to the parliament, but said that further reforms are needed. Bryndis Haraldsdottir, head of the delegation from the OSCE Parliamentary Assembly, said the reforms made after inter-party dialogue “should be seen as only the starting point for a more transparent dialogue towards broader and much needed further reform”.

They also noted some violent incidents on election day. “We welcome the return to a more pluralistic and diverse parliament in Serbia following yesterday's elections, where voter turnout was higher. However, we condemn the violent attack on election day against one opposition leader … We regret that the campaign was held in a highly polarised political environment, marked by limited media freedom and pluralism and government pressure on voters,” said Thijs Reuten, head of the delegation from the European Parliament.

Protesters gathered outside the RIK building in Belgrade at a demonstration organised by the opposition Assembly of Free Serbia and Ecological Uprising. Protesters complained about RIK’s decision not to release the results of the election on the night of April 3, and the lack of data on turnout after polls closed. 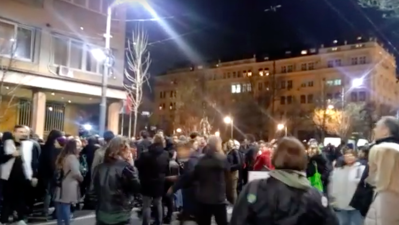 Aleksandar Jovanovic Cuta of Ecological Uprising official told N1 that protesters were seeking a public recount of all ballots, and answers as to why RIK had been closed to the media overnight.

One protester told bne IntelliNews that people had gathered because “the election was a little bit stolen”. As people started to leave, she added: “People are going home now but this is not the end.”

While Kraja Milana Street where the protest took place, between the RIK headquarters and the presidency, was closed to traffic by police cars at each end, there was not otherwise a large police presence.