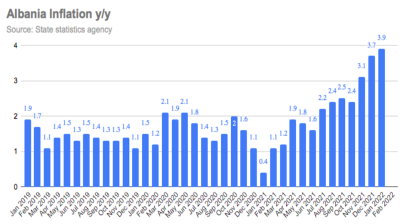 Several hundred protesters gathered outside the prime minister’s office in Tirana on the evening of March 9, as consumer price inflation reached a 10-year high.

Protesters demanded that Edi Rama’s government bring down the price of oil and abolish VAT on fuel. They said the protests will continue if officials don’t act.

Commodity prices, including prices of oil, grain and metals, have already soared since the Russian invasion of Ukraine on February 24. Even before the invasion, Albania, like other many other countries, faced steep inflation as prices of energy and food rose on international markets as the world emerged from the coronacrisis.

Albania’s annual inflation rate continued its rise in February, increasing to 3.9%, up from 3.7% the previous month, data from statistics office Instat showed. The month-on-month increase in prices also accelerated, to 1.3%.

Higher food prices were the main contributor to the annual rise in the consumer price index (CPI), increasing by 6.9% to push the overall CPI up by 2.45 percentage points (pp). Higher food prices are mainly a result of higher energy prices on international markets that have pushed up the costs of inputs.

The steepest price gain was for transport, where prices rose by 10.4% to contribute 0.55 pp to the rise in the CPI.

The highest monthly price increase was for food and non-alcoholic beverages, which climbed by 3.2%, followed by transport (1.8%).

Rama warned earlier this week that the threat of a deepening energy crisis is growing daily as Russia and Nato members mull stricter sanctions on each other.

Addressing citizens on March 8, Rama noted that a senior Russian government official had threatened an oil price rise to as much as $300 per barrel. Since the start of the war, oil prices have already surged to their highest level since 2008, passing $130 per barrel.

“While the major alliance countries face growing criticism that they are financing the war by buying gas, [an] oil and gas boycott would be a tectonic shift with consequences of predictable difficulties in the short term … [in the] medium or long term the issue would be resolved. In this context, Albania is no exception; on the contrary, it is directly affected in the same way as all other countries.”

He also warned that in an extreme scenario, Albania could face cuts in supply of oil or energy, but that the government “will do our best to protect our people”.

Minister of Infrastructure and Energy Belinda Balluku, also present at the press conference, called on citizens to look for ways to consume less energy. “We should consume less and not take the car to buy cigarettes or bread on the street corner, but walk,” she recommended.