Public investment to boost growth in the Western Balkans 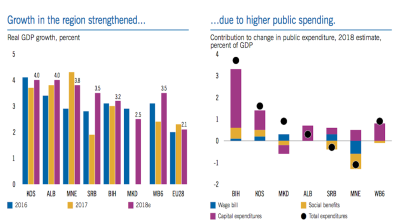 Higher public investment and consumption are supporting rising economic growth in the Western Balkans, which is forecast to pick up to 3.5% this year, according to the World Bank’s Western Balkans Regular Economic Report released on October 4.

Montenegro is expected to perform better than average, posting a 3.8% growth in 2018, while Kosovo and Albania should perform even better, expanding by 4% each. Serbia and Bosnia & Herzegovina are seen performing a bit worse (3.5% and 3.2% GDP growth this year respectively) and Macedonia’s GDP is expected to expand by just 2.5%, though this is still an improvement on last year.

“Driven by tax reforms and faster growth, higher tax revenues created fiscal space, which some countries rushed to use for current spending and capital investment. Greater public investment is a welcome sign, but to be successful it must be supported by more efficient and effective public spending,” the World Bank noted in the report.

It added that a surge in untargeted social spending and public wages immediately affected the growth rates in several countries through faster growth in consumption and household credit.

“But such effects are temporary and costly to sustain: in the longer term they heighten fiscal vulnerability,” the report noted.

It added that possible tightening of the financing conditions in international capital markets is a downside risk for the region.

Domestic and regional political stability is also a factor that would affect the robust growth.