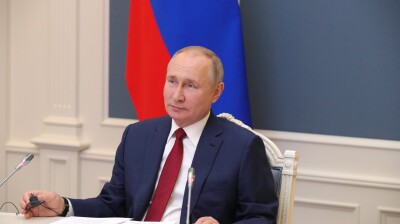 Vladimir Putin: "When we judge other people or evaluate other states, nations, we always seem to look in the mirror, we always see ourselves there."
By Ben Aris in Berlin March 19, 2021

The war of words that broke out between Russia and the US following President Joe Biden’s affirmation he thinks Russian President Vladimir Putin is a “killer” continued on March 18 with Putin saying “takes one to know one.”

“When we judge other people or evaluate other states, nations, we always seem to look in the mirror, we always see ourselves there. We always see our essence in the other person,” Putin said when asked about Biden’s comments at a live televised meeting Thursday.

“During childhood, when we argued with each other in the yard, we’d say: It takes one to know one!” he said.

“What would I say to Biden? I would wish him good health, I say that without irony or joking,” he added as cited by the Moscow Times.

With relations between Moscow and Washington already near rock bottom, they took a further step down after Joe Biden was asked if he thought Putin was a killer in an interview earlier this week and mumbled the reply “I do.”

As bne IntelliNews argued in a blog the question was a classic bit of journalistic fishing for a sensational headline, but Biden fell into the trap by answering the question. However, Moscow reacted strongly and has recalled its ambassador to Washington, although the story has been downplayed in the state-owned media in Russia, with Putin suggesting Biden has mental health problems because of his age and initially wished him “good health” in his first public reaction on March 17.

But the Russian president followed up saying “It takes one to know one” in televised comments on March 18. There has been some discussion in the Russia-watching community, as the phrase can also be translated as “those that live in glass houses shouldn't throw stones,” but the gist of the comment remains the same.

As is often the case in these trans-Atlantic mud-slinging matches, Putin’s comments were as much aimed at the domestic audience as Washington. Putin is locked in a PR battle with the Russian opposition and most recently is trying to counter claims of corruption following the release of jailed anti-corruption activist and opposition politician Alexei Navalny’s expose “Putin’s Palace” that claims Putin has enriched himself while in office.

The state-owned media have reported the story carries the remarks of a senile old man, or also made the point that Biden didn't actually say “Putin is a killer” but only answered in the positive to a provocative question by a journalist.

Tensions between Russia and the US have escalated quickly in the last week as the markets wait to see what other sanctions Washington will impose on Russia, after it followed the EU’s lead earlier this month and imposed mild sanctions on nine officials in connection with the poisoning and jailing of Navalny. CNN reports that more stringent sanctions could be imposed as soon as next week. Tim Ash, senior sovereign strategist at BlueBay Asset Management, said in an op-ed carried by bne IntelliNews today that Washington should target the primary issues of Russian debt – its Eurobonds, and more damagingly the primary issue of its Russian Ministry of Finance ruble-denominated OFZ treasury bills.

That would not be as painful as banning US investors from owning Russian debt outright, which would result in heavy losses for international investors, as bne IntelliNews recently argued, which remains the “nuclear option”, but would still be seen as a very aggressive move.

Russian Foreign Minister Sergei Lavrov recently laid out the new rules of the game in a speech in February that warned any sanctions that damage Russia’s economy would be met with equal measures, including a threat to break off diplomatic relations.

Putin's latest remarks echo Biden's retelling of his March 2011 meeting when he told the then-Russian prime minister that he didn't think he had a soul. “He looked back and he said: 'We understand each other',” Biden recalled in his interview this week.

Earlier on March 18 the Kremlin said it was “clear” that Biden isn’t interested in improving relations with Russia and that "we will proceed from that."

Putin clarified that Russia doesn't plan to completely sever ties with the US, but would work with Washington "in those areas in which we ourselves are interested and on the terms that we consider beneficial for ourselves."

The US Commerce Department on March 17 also expanded its export restrictions to Russia as part of the automatic sanctions that follow from invoking the Chemical and Biological Weapons Control and Warfare Elimination Act of 1991 (CBW) that was used to impose sanctions on officials following Navalny's jailing.