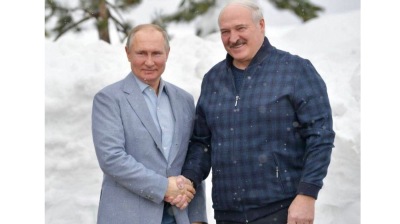 Russian President Vladimir Putin and his Belarusian counterpart Alexander Lukashenko met and held six hours of intensive talks in the Black Sea resort town of Sochi and discussed the deepening integration of their two countries.
By Ben Aris in Berlin February 23, 2021

This was the second time the two presidents had met in Sochi since Belarus was plunged into its worst political crisis of Lukashenko’s 26 years in office following the disputed August 9 presidential elections.

At the last meeting Putin promised Lukashenko $1.5bn in debt relief but no new cash to shore up the struggling Belarusian economy. Later Russia did offer $500mn of new money, but given the population withdrew $1.4bn in hard currency from the banking sector, significantly hitting the country’s reserves, the Kremlin seems to be following a policy of investing as little as it can into propping up Lukashenko’s regime.

The latest meeting between the two men in Sochi was a more informal event than the one last September. Lukashenko turned up two days early and seems to have taken a bit of a holiday in the semi-tropical Sochi climate.

The two men started their meeting in the afternoon by going skiing together and then continued talks over dinner and into the evening.

The Kremlin press service said the agenda included talks on the key issues of the development of Russian-Belarusian relations, of the strategic partnership and alliance, major joint projects, as well as a further promotion of integration processes within the framework of the Union State – a deal that could create a sort of Rublezone and which was agreed to in principle in 1999, but never acted on.

During the open part of the meeting the two leaders also discussed supplies of the Sputnik V anti-coronavirus (COVID-19) vaccine to Belarus, industrial co-operation, as well as stating that instruments of interaction between Moscow and Minsk are functioning successfully, reports state-owned newswire Tass.

"Of course, I am very grateful to you for the support you are providing for the economy of Belarus. I need to inform you, this is not in vain, the money is not wasted," Lukashenko told Putin.

Lukashenko repeated promises to change the Constitution that would weaken his presidential powers and pave the way for his eventual removal – the Kremlin’s preferred method of ending the stand-off between the president and his people.

Lukashenko called an All People’s Congress earlier this month that was supposed to consider draft changes to the constitution. But it appears that Lukashenko is still dragging his feet, as no draft proposals were submitted to the 3,000 delegates bussed in for the Soviet-style event. Lukashenko only made a vague promise that the proposals would be submitted for consideration “by the end of this year” and that a referendum on the changes would be held next year.

Member of the opposition movements and in particular those of the Coordinating Council were not invited to the Congress and have dismissed it as irrelevant.

Belarus’ economic situation is likely to ease this year thanks to its deep ties to the Russian economy, which is already showing signs of recovery and is expected to expand by 3% this year.

According to him, Belarus purchases in Russia "a huge amount of raw materials and components," and this volume "is constantly growing." If Russia and Belarus implement their projects as planned, then imports from Russia will grow significantly, the Belarusian head of state said.

It appears that part of the Kremlin’s plan is to use the crisis to deepen the integration between the two countries as part of Putin’s wider economic goal of turning the Eurasia Economic Union (EEU), of which Belarus is a member, into a single market that will stretch “from Lisbon to Vladivostok.” Details of the mooted Union State deal were clearly high on the agenda.

The governments of Belarus and Russia have six to seven integration roadmaps left to fine-tune out of a total of 33 that are part of the Union State deal.

"I think, we determined 33 directions – these are roadmaps that were developed. We agreed that we will modernise, update them. The governments did a lot, they updated the format. Today, Ambassador [of Belarus to Russia Vladimir] Semashko reported that there are may be six-seven roadmaps left out of 33 that the governments work on. All others are ready to be signed," Lukashenko said.

For his part Putin stressed deepening industrial integration between the two countries.

"Alexander Grigoryevich [Lukashenko], you mentioned financial support. You are absolutely right; it is important but it is by far not the most important part. The important part is the joint work on co-operation in the real sector of economy," Putin said.