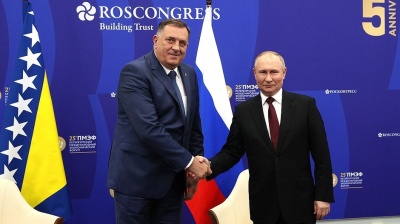 Dodik was seen for years as one of the most loyal allies to Putin. In the past years, there were reports suggesting that Putin might even spark a new military conflict in Bosnia through Dodik in order to divert the attention of international community from his policy towards Ukraine.

Putin met Dodik at the St. Petersburg economic forum and said that Moscow has “developed very good relations” with Bosnia’s Republika Srpska entity since the Bosnian Serb presidency member, Dodik, has been in power, Putin said after the two met in St. Petersburg, adding that he appreciates Dodik’s opposition to Bosnia introducing sanctions against Russia.

As bne IntelliNews has reported, the St Petersburg International Economic Forum (SPIEF) has been a muted affair this year, with few Western companies in attendance.

“Unfortunately, in the current conditions with Bosnia & Herzegovina, we have certain difficulties associated with joining the sanctions, but we know your position and highly appreciate it. Despite any difficulties, relations continue and will continue to develop, especially with those who want to maintain this relationship. And you, as far as I know, are just such a person,” Putin said at a joint press briefing with Dodik.

Dodik, who is also the leader of the ruling party in Republika Srpska, has insisted that Bosnia should not introduce sanctions against Russia over the war in Ukraine and has so far blocked the process.

“I want to thank you for everything you do for us. … Thank you for making it possible to keep the price of gas until the new year under the previous conditions. We think that there can be no alternative to Russian energy, we want to continue with investments,” Dodik said.

Prior to his meeting with Putin, Dodik threatened to block all projects in the country if the state authorities continue to obstruct the project to connect Republika Srpska with Serbia by gas pipeline, which is being conducted by Russia's Gazprom.

“It is unjustified that this is being blocked by institutions in Sarajevo. If they continue to block our request, then we will also block other projects that are important for BiH. We will take a number of measures to force them to do so,” Dodik said in St. Petersburg on the sidelines of the International Economic Forum where he met with the chairman of Gazprom's management board, Alexey Miller, as quoted by N1.

He added that the entity has been waiting for ten years for the state to allow the construction of a gas pipeline under the Drina River, while at the same time the Serbian side is not opposing Bosnia’s gas connection with Croatia through a southern gas interconnection.

According to Dodik, Gazprom's CEO announced that the company would deliver natural gas to Republika Srpska at the same price until the end of the year.