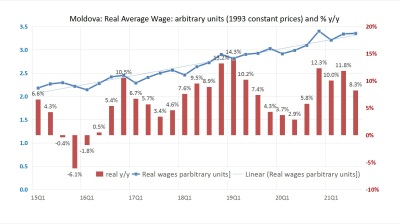 The average net wage in Moldova increased by 13.6% y/y to MDL9,176 (€455) in the third quarter of 2021 and the real annual advance slowed down to 8.3% y/y from double digits in the previous three quarters, the statistics bureau BNS reported.

From a broader perspective, the average net wage in Moldova has increased at an average rate of 6.5% per annum over the past six years — a rather robust advance that pushed up, besides remittances, retail sales and private consumption. The double-digit growth rates seen in the previous quarters visibly contributed to inflation, while energy prices are expected to remain the main driver in the coming quarters.

The average number of employees has recovered in the third quarter this year from the steep decline seen during the crisis last year and posted a significant +2.9% y/y advance.

From a broader perspective, however, the number of employees in Moldova has remained rather constant: it advanced by only 2% — meaning by 0.3% per annum — over the past six years.

Headline inflation hits 13.9% y/y and is still far from peak in Moldova