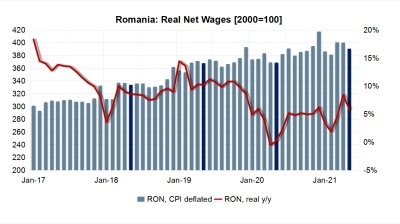 With the construction sites abandoned by the Romanian workers returning to their jobs in Spain in the midst of a real estate boom at home and the rural population returning to seasonal work in Germany and Italy at a time when local and foreign investors plan more manufacturing facilities, employers in Romania have no other option but to accommodate higher wages and the government must provide better public services to keep them from emigrating.

Romania’s labour market thus enters a new, more pragmatic stage of development as it emerges from the COVID-19 crisis, a stage when the companies are likely to support higher wages by investing in the development of the existing low-skilled workforce: over one-third of the employees in the private sector paid with the minimum statutory wage.

Despite the state forecasting body CNP predicting only a 2% real advance in the net wages this year, Romania’s average net wages increased by a real 4.8% y/y on average in January-May, and the real annual growth rate (deflated by CPI) accelerated to 5.9% in May.

Besides the narrative of the frozen wages in the public sector and the private sector’s limited resources for paying higher wages, a new factor is re-surfacing during the post-crisis period: the labour market returned to the tight state seen before the lockdown, just as the Romanian workers returned to their jobs in Italy, Spain, and Germany.

In the UK alone, nearly one million Romanians have obtained post-Brexit residence permits, and they are likely to be part of the active population.

As for the companies’ limited resources, the wages in Romania are among the lowest in the European Union: RON3,492 (under €700) in net terms, in May, despite the 9.8% annual increase.

1.6mn Romanian employees receive the minimum statutory wage (under €300) at the end of the month and this means there is potential for higher wages, said Adecco country manager Sorin Glodeanu in an interview with Ziarul Financiar daily. Under such circumstances, speaking about macroeconomic sustainability (or the lack of it) is ridiculous, he said. It is only a matter of training and the companies are already working on it.

Most of the people paid the minimum wage are in the small cities and in the sectors of trade, HoReCa, and manufacturing.

Prices elevated by a combination of demand for electricity for cooling and an outage at one of the reactors of Romania’s nuclear power plant.

Retail sales have been growing for most of this year as coronavirus restrictions are gradually lifted.

73.8% of Montenegrins want their country to join the EU

Nearly half of survey respondents pointed to the better quality of life and higher living standards as the main benefits of membership of the EU.

Russia's GDP catches up with pre-COVID level
3 days ago
Heatwave pushes up spot electricity prices in Southeast Europe
3 days ago
Annual growth of Slovenia’s retail sales slowed to 12.8% y/y in June
4 days ago
73.8% of Montenegrins want their country to join the EU
4 days ago
Russian banks maintain recovery, double profit in 1H21
5 days ago