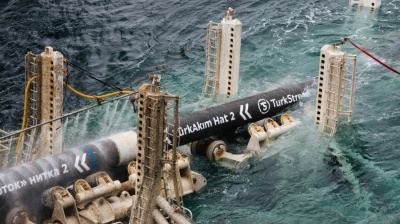 Russia is reportedly taking the position that Western sanctions prevent it from maintaining the crucial TurkStream natural gas pipeline that supplies Turkey, countries in the Balkans and Hungary.

If the pipeline were to be shut down, it would exacerbate Europe's energy crisis, already this week worsened by mysterious explosions that have put three of the four strands of the Nord Stream Russia-Germany two-pipeline system beyond repair.

In a letter to managers of South Stream Transport BV on September 14 – obtained by media outlet RFE/RL – company director Oleg Aksyutin ordered them to cease all work on TurkStream, including cancelling contracts with Western suppliers. Only emergency work might be authorised.

South Stream Transport BV, a Dutch unit of Kremlin-controlled gas giant Gazprom that is responsible for operating the underwater Black Sea pipeline that provides a key route for Turkey-bound and Balkans and Hungary-bound gas, was reported as saying that the Netherlands had revoked its licence as of September 17.

"Suspend the execution of all contracts related to the technical support of the gas pipeline," Aksyutin was cited as writing in the letter, "including design, manufacture, assembly, testing, repair, maintenance and training."

TurkSteam has the capacity to deliver 33bn cubic metres of natural gas annually. Turkey consumes half of that provision, while the rest is sent via a pipeline (sometimes referred to as Balkan Stream) dedicated to deliveries via Bulgaria to the Balkans and Central Europe, especially to Serbia, North Macedonia and Hungary.

RFE/RL pointed out that TurkStream lies 3 km below the sea in waters with high seismic activity. It said specialised ships frequently monitor the infrastructure for damage and make rapid repairs. The required monitoring and repair equipment is mainly imported from the West.

The contract revocation meant that "no one will be able to carry out repairs if a pipe is damaged, gas leaks or if a part of the pipeline comes apart due to an earthquake. In fact, the company has lost operational control over the pipeline, the Russian branch has lost contact with the corporate centre," a Russian source at South Stream Transport informed RFE/RL.

Western countries have accused Moscow of using the Ukraine war sanctions imposed on Russia by the West as a pretext to cut gas exports to Europe. Russia’s plan, they say, is to deal Europe severe economic blows and potentially leave European households exposed to winter weather, thereby undermining support for the EU’s backing of Ukraine.

The EU last year received 40% of its gas needs from Russia, but many member states now want to wean themselves off Russian gas supplies entirely, seeing it as a now hugely unreliable supplier that has become a threat to their energy security.

Hungary Today on September 29 reported Hungarian Foreign Minister Peter Szijjarto as telling a meeting of energy ministers from the Organisation of Turkic States (OCT) in Almaty, Kazakhstan, that without an operational TurkStream, Hungary would be in big trouble.

Turkish President Recep Tayyip Erdogan has this week briefed reporters that he foresees no problems affecting Russian gas supplies to Turkey this winter. Officials have informed local media that Turkey has filled its gas storage facilities ahead of winter.