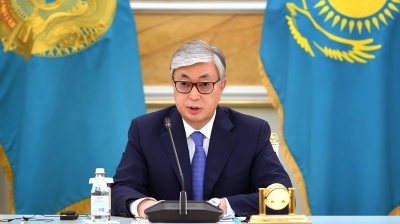 The newly inaugurated president of Kazakhstan, Kasym-Zhomart Tokayev, will struggle to convince onlookers Nazarbayev isn't pulling all the strings. His very public thanking of the police for a job well done has also struck a bum note, given the pictures of ugly arrests that went around the world.
By bne IntelliNews June 13, 2019

The presidential election protests in Kazakhstan that broke out over June 9-11 and led to an official tally of around 700 arrests, appeared to lose steam on June 12. Very few people managed to show up for what activists hoped would be countrywide demonstrations on a day that saw Kasym-Zhomart Tokayev ceremonially inaugurated as president.

Tokayev officially won the snap presidential election with 70.96% of the vote, with the only genuine opposition candidate, former journalist Amirzhan Kosanov, coming in second with 16.23%. However, independent election observers said the results of the vote were wildly inaccurate. Kosanov won the vote in West Kazakhstan, Aktobe, Atyrau, Mangystau, East Kazakhstan and Zhambyl regions and in the country’s largest cities Almaty and the capital Nur-Sultan, according to the claims of Kazakh ex-prime minister and opposition member Akezhan Kazhegeldin, who currently resides in London and spoke to Radio Azattyk. This interpretation of the results is entirely at odds with the official conclusion that shows Tokayev winning in every region. The rallies planned for June 12 were meant to express the public’s rejection of the official election results.

But no demonstrations ultimately came about, partly due to the authorities pre-emptively deploying masses of police officers to areas where protests were set to take place in Almaty and Nur-Sultan. Officials also made it clear that there was an unofficial semi-curfew in effect on June 12. They ordered offices to send employees home early and urged people to not go out into the streets. Some businesses were closed down early as well.

All messenger apps, including WhatsApp and Telegram, were down on the day. Some Kazakhs got around this restriction by turning to a mobile banking application belonging to the local Kaspi Bank. It allowed people to send each other messages that could be pinned to small sum money transfers.

At Astana Square in Almaty, bne IntelliNews spotted scores of policemen along with numerous local journalists clad in yellow vests tagged “PRESS”. The protesters themselves were seldom to be found, with law enforcement mostly focused on rounding up bystanders and passersby. Media outlets reported the arrests of 100-150 people, but very few of those detained were likely even out on the streets with the intent of joining demonstrations.

The promise of dialogue
Tokayev’s inauguration speech earlier on June 12 attempted to address the situation in a country where many people seized on the first chance in three decades to elect a president other than autocrat Nursultan Nazarbayev, who resigned earlier this year, to let out their frustrations with the economic and political systems.

"Dialogue between the authorities and the people is needed," he concluded during the speech, noting that such dialogue "must be based on the recognition of the plurality of opinions".

A day prior to his inauguration, Tokayev announced plans to set up a special national council that would be open to Kazakh political activists.

For a leader hoping to initiate dialogue with opposition activists, Tokayev’s regime demonstrated an awfully stark eagerness to crack down on dissent. The new president has praised the police for their actions in recent days and has said they will continue to conduct their duties in the same way in future. Read between the lines.

As the handpicked successor of Nazarbayev, who still wields power in the country from the shadows, Tokayev is widely seen as Nazarbayev’s puppet first and foremost. But if the ruling elite is to seriously promise any genuine improvements for ordinary Kazakhs, addressing the economic grievances of the oil-rich nation’s population would be a good place to start in preventing public discontent from souring further. If there is going to be real dialogue, the economic concerns of the population will have to take precedence on Tokayev’s agenda. He must know the genie may be out of the bottle.

Hungary's headline inflation rose remarkably in December, as expected, mainly on the back of energy prices. But what's more important is that core inflation slowed somewhat, so we see the central bank remaining calm.

At 4.0% y/y, December inflation came in slightly above our 3.9% forecast and market consensus. We believe that this will be the peak for many months to come.

TEHRAN BLOG: Now is no time to appease Trump

As the US tramples on international law and lapdog UK’s PM says nuclear deal can be replaced with something from “the great dealmaker”, respecters of democracy everywhere should side with the lesser of two evils: Iran.

Industrial production in Czechia fell by 5.7% year-on-year in November as the five year long boom comes to an end.