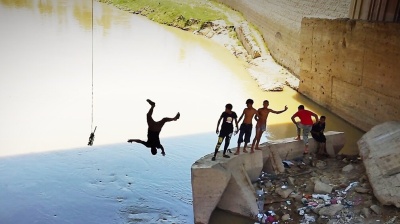 A photograph put out by IRNA with an article telling how "After 18 days of water tension in Dasht-e Azadegan city, with the release of water from Karkheh dam, on July 21, water reached some parts of the city and Rafi, Bostan and Susangard." / IRNA
By bne IntelIiNews July 21, 2021

A police officer was shot dead and the Iranian military began shipping water tankers to the restive Khuzestan region as Iran’s drought protests threatened to escalate and possibly spread to the capital, according to local reports on July 21.

The official Islamic Republic News Agency (IRNA) reported that the deceased officer was part of a team dispatched to the southwestern town of Mahshahr in Khuzestan on the evening of July 20 in order to “clear it of rioters”. Another policeman was reportedly wounded. The semi-official Fars News Agency, meanwhile, quoted defence ministry spokesperson Morteza Moradi as saying 10 water tankers were headed to the oil-producing Khuzestan region to replenish water supplies amid Iran’s worst drought in 50 years. Big street protests over water shortages and other difficulties have been seen in mainly majority-ethnic Arab localities of Khuzestan during the past six nights, though ascertaining the extent of the demonstrations is difficult given that it is not possible to verify most video footage of the unrest posted on social media.

Nevertheless, the events—which have seen at least two young men shot dead in Khuzestan, one, reportedly, accidentally by a fellow protester—must be of growing concern to the hardline Ebrahim Raisi administration due to take office on August 5, with protests also mounted over severe waves of power outages afflicting Iran—partly caused by the grinding to a halt of hydroelectric facilities amid the lack of water—as well as over pensions decimated by annual inflation of 40-50% and low wages in the energy industry. Protests at oil refineries and petrochemical plants—under the strike name of "Campaign 1400", referring to the Persian calendar year that started on March 21—have been unrelenting for months.

Unauthenticated video footage put out on social networks on late July 20 and early July 21 showed women chanting "Down with the Islamic Republic" at a Tehran metro station.

Exiled opposition groups have been calling on people across Iran to show their solidarity with the Khuzestan rioters. Raisi will be wary of the water drought protests turning into general and widespread demonstrations against the régime. Raisi’s presidential election win in June angered many millions of Iranians, who were infuriated that the leading moderates who stepped forward to contest the right to succeed outgoing moderate President Hassan Rouhani were barred from standing by vettors.

Some videos uploaded to social media showed security forces using teargas to disperse protesters, but, again, the footage remained unverified. That was also the case with videod scenes posted on mobile app Telegram apparently showing, in the Khuzestan town of Izeh, demonstrators chanting “Reza Shah [the first Pahlavi king of Iran in the 20th century] bless your soul.”

Further footage of unconfirmed origins, filed on July 20 and July 21, showed protesters at Sadeghieh Metro Intersection Station in the west of Tehran chanting “Death to the dictator, death to [Supreme Leader Ali] Khamenei” as anger spread over increasing power outages and water shortages in the capital and security forces surrounding Tehran’s iconic Azadi Tower in apparent preparation for sizeable protests.

The scorching hot summer and dearth of water have highlighted how efforts to desalinate water from the Caspian Sea and Persian Gulf to compensate for over-extraction of groundwater have not at all managed to fill the supply void. The water shortages have devastated farmlands and livestock in Khuzestan.

Last week the head of Khuzestan’s Water and Power Authority said water levels at the province’s dams were expected to be 42% below normal levels until late September because of record low levels of precipitation and hot temperatures, Fars reported.

Tehran’s power outages are described as the worst endured since the 1980s war with Iraq.

Turkey's official inflation weakens for first time in year and a half, dips to 84%

Russian composite output stagnates as services PMI contracts in November
Global wage growth fails to beat inflation for the first time in 20 years
Turkey's official inflation weakens for first time in year and a half, dips to 84%