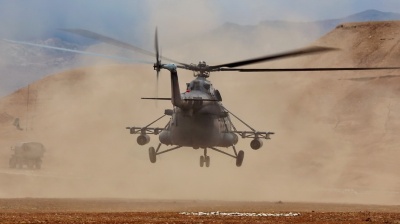 Since the Taliban takeover of Afghanistan, Russia has been holding near continuous military exercises with Tajikistan and other Central Asian republics.
By bne IntelIiNews October 8, 2021

A Tajik militant group in Afghanistan that may be beyond the control of the Taliban could be planning an incursion into Tajikistan, according to Russian media reports.

Moscow on October 8 responded to the reports, saying Russia, which has a military base in Tajikistan, stood ready to protect its ally in the event of any such cross-border attack from neighbouring Afghanistan.

"There are indeed reports that the Taliban cannot control the situation [in northern Afghanistan]... Still, we hope they [the Taliban regime] will honour the promises they have made [about not attacking neighbours]," Interfax news agency quoted Russian Deputy Foreign Minister Andrei Rudenko as saying.

"All necessary assistance will be provided to Tajikistan if required, both within the [Moscow-led] Collective Security Treaty Organisation [CSTO] framework and bilaterally," he added.

The Tajik militants are said to be allied with the Taliban, but nevertheless not entirely under the control of the Islamist fundamentalists who seized power in Afghanistan in mid-August amid the chaotic departure of US forces from the war-torn country.

Since their takeover of Afghanistan, the predominantly ethnic Pashtun Taliban have been riled by Tajikistan, where the National Resistance Front (NRF) Afghan government-in-exile is based, and, in a war of words, the jihadists have warned the country’s Rahmon administration against meddling in Afghan affairs.

The Tajiks—who speak a variety of Persian—are the second largest ethnic group in Afghanistan, perhaps making up more than a quarter of the population and the majority of inhabitants in some northern areas of the country close to the border with Tajikistan, a former Soviet republic. Tajikistan is calling for an inclusive multi-ethnic government to be put in place in Afghanistan.

There have been reports of troop build-ups on both sides of the Afghan-Tajik border since early October. The Taliban’s own information confirmed that thousands of Afghan special forces fighters were being deployed in Afghanistan’s Takhar province adjacent to Tajikistan, TASS previously quoted Russian foreign ministry spokesman Alexei Zaitsev as saying in response to the reports. On the other hand, Russian RIA news agency cited Taliban spokesman Bilal Karimi as saying the movement had not been building up its forces at the Tajik border.

Since the Taliban took control of Afghanistan, Russia has been holding almost continuous military exercises with forces of Central Asian republics to Afghanistan’s north.

Tajik President Emomali Rahmon doubled down on his criticism of the Taliban in an address to the UN General Assembly on September 23, warning that “various terrorist groups are actively using the unstable military-political situation in Afghanistan in order to strengthen their positions”.

“We are seriously concerned and regret that Afghanistan is once again on its way to becoming a platform for international terrorism,” he said.

Nazarbayev ousted from power, search for Kazakhstan’s vanished ‘Leader of the Nation’ centres on Switzerland, Russia and China

bneGREEN: NDCs need to be rapidly improved to get near 1.5°C target
Nazarbayev ousted from power, search for Kazakhstan’s vanished ‘Leader of the Nation’ centres on Switzerland, Russia and China
Mongolian traders in disarray as China’s zero-Covid policy chokes business