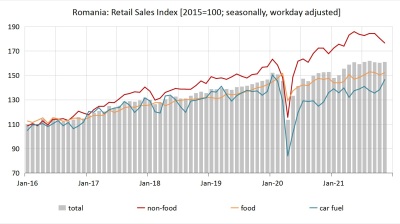 Romania’s retail sales expressed in volume terms increased by 5.0% y/y in November, gaining momentum from 4.1% y/y in October according to the statistics office INS.

Compared to November 2019, the retail sales volume was 4.2% larger, revealing a significant 2.1% annual growth rate. But more detailed, seasonally-adjusted data and the filtering out of the base effects reveals that retail sales have stagnated since May 2021, while sales of non-food goods (most relevant for consumer confidence) contracted by 4.3% in October and November.

Net wages contracted by 1.8% y/y in November, when the headline inflation hit 7.9% y/y. The outlook does not look great in this regard as energy bills are generally expected to increase during the winter period.

High energy prices are still compensated to some extent by the state — but this means that households expect even higher prices from April.

Consumer lending remains indeed strong even by pre-crisis standards, but the volume of new consumer loans contracted by 27.5% in November compared to July 2021, when it peaked.

Non-food sales dragged up the overall sales figures after the lockdown period and they peaked in May 2021 when they were 9.9% compared to May 2019. Since then, however, the seasonally adjusted sales of non-food goods have contracted by 5%.

On the upside, in November 2021 sales of fuels (seasonally adjusted) reached the highest level since January 2019. The figure was 4% higher compared to November 2019. It is, however, premature to conclude that fuel sales have already recovered to pre-crisis levels, given their volatile pattern.