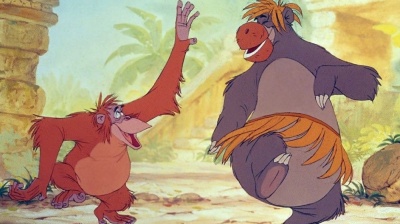 The State of The Russian Nation? It’s a mess.
By Julian Rimmer in London April 22, 2021

He fancies himself as The King of The Swingers, but it’s The Simple, Bare Necessities that Russians care about.

The State of The Nation? It’s a mess.

So Mafia Daddy, Vladdy The Baddy Putin thinks Kipling is a great writer? Who knew? No one. Why? Well, I have my doubts he’s read so much as a word written by the Nobel Laureate, although his speechwriters might have. It wouldn’t surprise me if he watches The Jungle Book or he likes the sound of The Man Who Would Be King and it’s true that his foreign policy is the embodiment of Kipling’s aphorism that “All the people like us are We, And everyone else is They,” but the Russian president just never struck me as the reading kind. Killers rarely are.

In a competitive field, Putin’s remarkable non sequitur was the highlight of his State of The Nation address. There was something in there for everyone, though. Foreign policy hawks thrilled to the imaginary red line he is drawing around Russia, the transgression of which would bring about punishment that is ‘swift, asymmetrical and severe’. If you back the opposition and protest within Russia, you are already on the receiving end of this anyway. If you can keep your head while all those about you are having theirs staved in by riot police wielding truncheons, then chances are you are attending one of those staged, modestly remunerated, pro-Putin rallies rather than one demanding the release from prison of Alexander Navalny, where wood shampoo is an occupational hazard.

In truth, the spending pledges outlined by Putin were distinctly underwhelming, adding up to just over $5bn in the next two years and barely moving the needle on Russia’s GDP. For ordinary Russians who have watched their real incomes decline by an extraordinary 11% since 2013, there was little by way of tangible benefits, but electoral lollipops were offered in the form of one-off payments of $130 per child. These will be doled out in August, just before parliamentary elections the following month, but the timing is purely coincidental, you see. Voters who cannot make the association warrant no better government.

There was a nod to the climate change lobby with promises to cut dangerous emissions, although if he’d cut the guff of his address short there, he definitely could have helped with the latter.

This, though, was a speech made by a tinpot tyrant with his mind on other things. He has an army of angry bees swarming the Ukrainian border. He has a hunger-striking ‘turbulent priest’ on his deathbed in one of his penal colonies and protests nationwide as a consequence. He has a coronavirus (COVID-19) vaccine, in fact several, which his ungrateful subjects are reluctant to have administered because, for some unfathomable reason, they do not believe anything uttered by the government. His economy is sputtering and the ruble is sinking despite buoyant energy prices. Inflation at 5.8% is a five-year high. Despite euphemistic reporting, the virus rages unabated, and to top it all, as if The Dictator didn’t have enough on his plate, that meddlesome CIA was hatching plots to bump off his fellow dictator next door in Belarus, probably by smearing deadly nerve agent on his smalls. “This is really too much!” ‘Indignant from The Kremlin’ exclaimed shrilly on stage. If you ask the 90% of Belarusians who voted Lukashenko out of office last year, however, I imagine they would chorus, “This is not enough!”

Since the onset of the pandemic, Russians have seen little of their president, with few public appearances. They had to make do with Putin and Shoigu writhing on animal skins in a winter woodland sheepskin photoshoot. Putin even baulked at the opportunity to remove his shirt on telly and show off his doughy torso and tight nipple clusters when being jabbed twice with the vaccine. The Kremlin’s paranoia about the health of the leader is reminiscent of the way the embalmers triumphed and kept the gerontic Politburo upright in the 80s. “He’s in showroom condition,” Peskov gushed.

With support for the United Russia Party at a ten-year low and so many problems afflicting Russia now, even the epithet ‘beleaguered’ bandied about on occasion, Putin needed to put on a show of strength. Hence the chest-beating, the teeth-baring, the anti-Western rhetoric, the bellicosity. More US sanctions are expected in the near future and for the first time today, Bob Menendez, chairman of the Senate Foreign Relations Committee, went on the record threatening sanctions on Russia’s banking and financial sectors if Navalny is not released. This is Biden’s Big Bazooka and one of the reasons Russia is playing wargames on the Ukrainian border: not to deter Zelenskiy but the State Department. It’s a bluff, of course, but who dare call it?

In the past, Putin has been able to deflect the impact of sanctions and use them to turn domestic sentiment behind him and against the West. After half a decade of lost growth, though, a pandemic in which the Kremlin has revealed itself to be criminally incompetent (as, in all fairness, have most governments) and the humiliating exposure of Putin’s plutocratic palace on the Black Sea, an exhausted electorate may turn against the party of the forever president in the Duma ballot, come September. Putin is tiptoeing carefully through a minefield he has laid himself.

It’s no great surprise, then, that after giving it the big ‘un and issuing The Threat Of All The Shortarses Down All The Ages, (“Cross me and you’ll regret it”) he seemed anxious to be off and away, exiting stage right as fast as his little legs would carry him. There goes the Jungle VIP.

COMMENT: “Patronagists” scandal brings back memories of the communist era in Albania

ING: Hungary’s wages vs consumption puzzle continues
18 hours ago
ING: Czech economy falls by less than previously feared in 1Q
5 days ago
COMMENT: “Patronagists” scandal brings back memories of the communist era in Albania
5 days ago
Taking the Tashkent Stock Exchange to the next level
9 days ago
COMMENT: Philanthropy in Russia – not for the faint-hearted
10 days ago